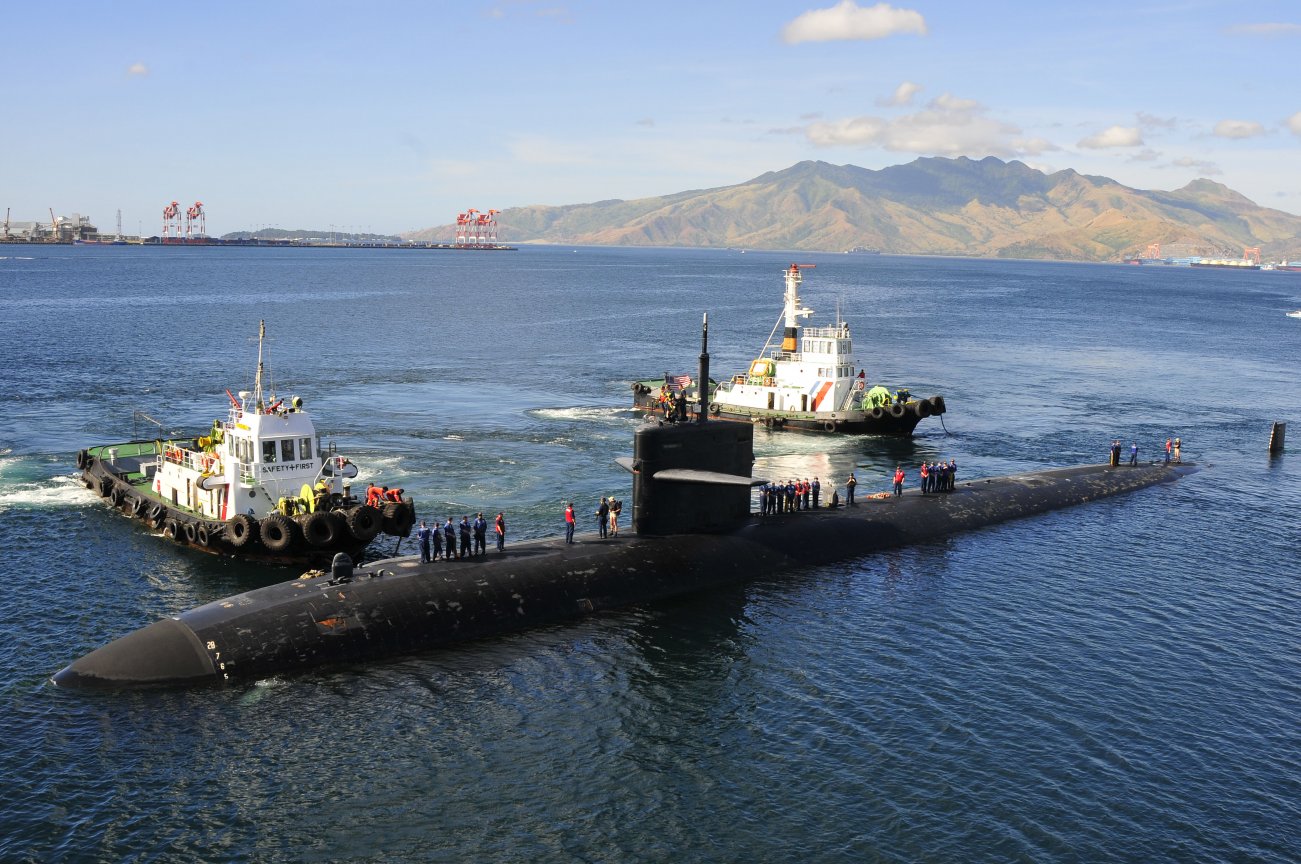 Why would Iran invest considerable sums in building its own submarines instead of shelling out for off-the-shelf hardware in Russia or China?  Iran's military has adapted as well as it can under many restrictions and sanctions. However, could it really hope to take on America?

Here's What to Remember: Past experience demonstrates that Tehran routinely exaggerates and obfuscates the scale of its defense projects, and the timeline in which they will be completed. Nonetheless, the submarine Fateh is tangibly real and looks like it could usefully expand the medium-range capabilities of the Iranian submarine fleet. While the status of the Besat class is more difficult to assess, if it is ever deployed it would mark another capability improvement.

The Iranian military has long planned for a defensive naval war in the Persian Gulf, in which it would leverage its large fleet of fast attack boats toting antiship missiles to launch swarming hit-and-run attacks on adversaries in along Persian Gulf, with the ultimate goal of shutting down passage through the Straits of Hormuz.

Supporting this naval guerilla-warfare strategy are twenty-one indigenously produced Ghadir-class mini submarines, derived from the North Korean Yono class. The 120-ton vessels can poke around at eleven knots (thirteen miles per hour) and each carry two 533-millimeter torpedoes. All in all, shallow littoral waters are very favorable for mini-submarine operations, with interference from rocky shallows and loud surf reducing sonar detection ranges and giving mini submarines abundant opportunities to hide and wait in ambush. On the high end of the capability spectrum, Iran operates three much larger and more capable Kilo-class diesel-electric submarines purchased from Russia in the 1990s. These can comfortably hunt in the waters of the Indian Ocean.

Four years ago, Iran also launched its own domestically built Fateh-class submarine. The homemade vessel may lack modern features such as antiship missiles or quiet Air Independent Propulsion system, but it does seem to be the genuine article—not something one should take for granted with reports of new Iranian weapons.

Why would Iran invest considerable sums in building its own submarines instead of shelling out for off-the-shelf hardware in Russia or China?

The reason is doubtlessly related to Tehran’s jarring education in how shifting international alliances can throw defense planning askew. Prior to the Iranian Revolution, the government of the shah was lavished with large quantities of top-shelf U.S. weapons, which became rather difficult to maintain after that one little incident in the 1979 involving the American embassy. When Iraq invaded Iran in 1980, Tehran found itself on the outs with both America and the Soviet Union, and turned to the Chinese for arms—as well as backdoor dealings with Reagan administration officials.

This tumultuous history has created a tremendous impetus for military self-sufficiency in Iran, even if the results in the short term are nothing special compared to extant foreign weapon systems.

(This first appeared in the summer.)

The “semi-heavy” Fateh (“Conqueror”) measures between forty and forty-eight meters long, and is claimed to displace about six hundred tons submerged—putting it in a similar weight class as the small German Type 205 and 206 coastal defense submarines launched in the 1960s and ’70s. It appears to be an elongated version of the Iranian-built Nahang, an unarmed prototype that may currently be serving as a special-operations submarine. Fateh has four bow torpedo tubes with likely access to six to eight reloads, with a circular sonar array situated under the tubes.

Fateh can operate up to two hundred meters below the surface—more than adequate for the shallow waters of the Persian Gulf. Sources variously place its maximum speed while submerged at between fourteen and twenty-three knots (sixteen to twenty-six miles per hour), with the lower estimate seeming more likely. The Fars news agency claims that Fateh can also operate up to five weeks at sea at a range of up to 3,100 miles, giving it the endurance to venture further afield into the Arabian Sea. However, it’s less clear how long the diesel-electric submarine can sustainably swim underwater without surfacing or snorkeling to recharge batteries.

You can see some media footage of Fateh in the clip below, including what appear to be deck plans at the two-second mark and the interior of the vessel at thirteen seconds. The website Covert Shores also offers a detailed analysis of the imagery here.

Despite being launched from the Bostanu shipyards in 2013, Fateh still appears to be undergoing sea trials and has yet to be declared fully operational. Jane’s claimed a second Fateh-class submarine was spotted in satellite photos under construction at the Bandar Anzali naval base on the Caspian Sea, but its current status is unknown.

Also nebulous are Tehran’s plans to produce two sixty-meter-long Besat- or Qaem-class submarines displacing 1,200 to 1,300 tons, armed with six torpedo tubes. Other claimed specifications include a three-hundred-meter diving depth and a maximum speed of twenty-three miles per hour.

This new design was announced in 2008, and was to enter service in 2015. A distinct lack of follow-up reports or imagery since that announcement give the impression the project has either been abandoned or is beset by major delays.

However, an Office of Naval Intelligence report published in March 2017 treats the Besat class seriously, and claims it will enter service with the Iranian Navy with the capability of firing submarine-launched cruise missiles in the next five years. Theoretically, such weapons would significantly increase the striking range of Tehran’s submarine fleet. However, such technology might prove difficult for Iran to develop independently.

A weapon that may be closer to entering service is the Hoot (“Whale”) supercavitating torpedo, which reportedly can attain speeds of over two hundred miles per hour—around four times faster than a typical modern torpedo. This is achieved by using rocket exhaust heat to vaporize water in the path of the torpedo, allowing it travel in a gas bubble with minimal drag resistance. The first Hoot tests were broadcast on Iranian TV back in 2006, and the weapon reportedly underwent new trials in 2015 and May 2017, though the outcome of those tests is unknown. Defense analysts believe the Hoot to be reverse engineered from the Russian Shkval torpedo.

Past experience demonstrates that Tehran routinely exaggerates and obfuscates the scale of its defense projects, and the timeline in which they will be completed. Nonetheless, the submarine Fateh is tangibly real and looks like it could usefully expand the medium-range capabilities of the Iranian submarine fleet. While the status of the Besat class is more difficult to assess, if it is ever deployed it would mark another capability improvement.

Though the new Iranian boats may remain far from the cutting edge of submarine design, they could still prove dangerous adversaries in the confined and shallow waters of the Persian Gulf. More importantly, the ongoing effort to domestically produce larger and more capable submarines and submarine-deployed weapons provides more evidence that Tehran is investing long-term efforts into becoming a self-sufficient military power.

Sébastien Roblin holds a master’s degree in conflict resolution from Georgetown University and served as a university instructor for the Peace Corps in China. He has also worked in education, editing and refugee resettlement in France and the United States. He currently writes on security and military history for War Is Boring.

Russian ace Medvedev explains after ranting about US rival

Today24.pro
Bet £20 on Arsenal vs Burnley and get money back as cash if you lose, plus 176/1 prediction and tips with Paddy Power NBA Gives Grayson Allen Laughable Suspension For His Hard Foul Alpine skiing at the Beijing Olympics 49ers-Packers halftime report: Garoppolo red-zone interception squanders first strong drive