A COIN-shaped “Bitcoin City” is being built on the side of a volcano powered by thermal energy in El Salvador.

The new city will be funded by cryptocurrency and will look like the crypto coin from the sky when it’s built in the south-eastern region of La Unión. 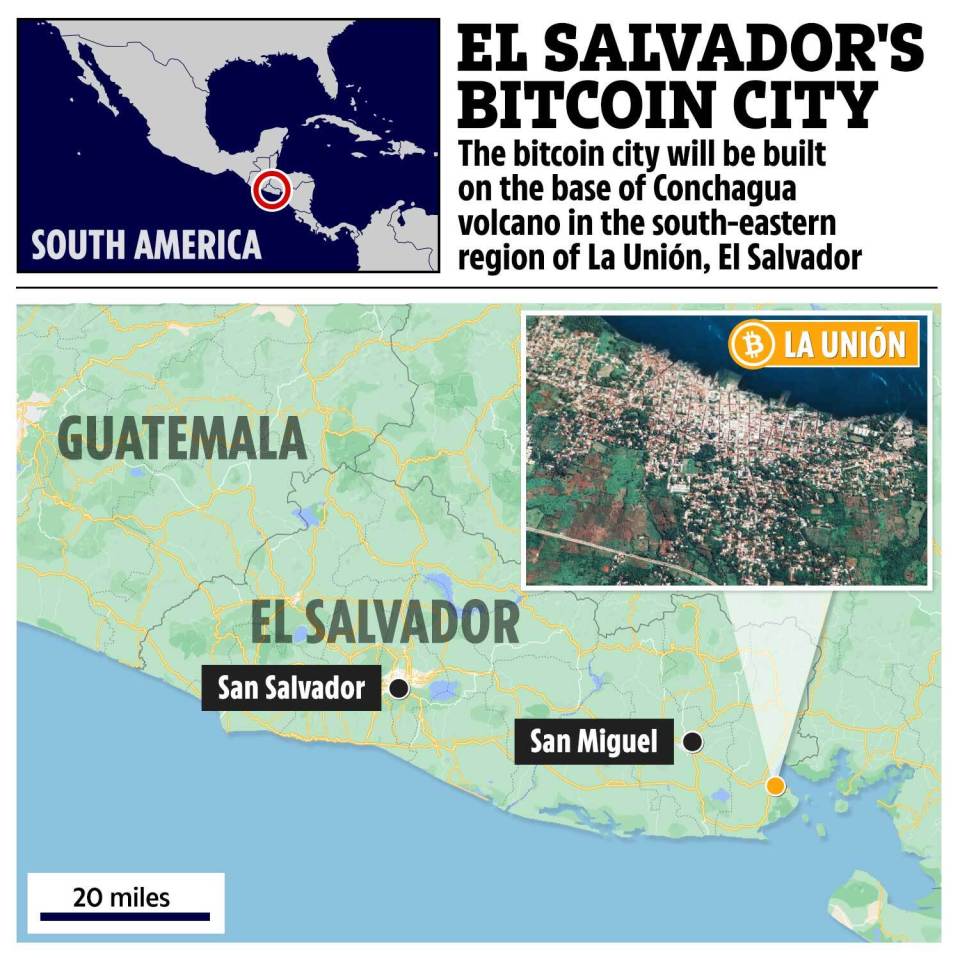 It will be built near the Conchagua volcano to take advantage of geothermal energy to power the city and Bitcoin mining – which demands energy-intensive solving of complex mathematical calculations.

There will also be no property, income or municipal taxes and the city would have zero carbon dioxide emissions, El Salvador’s president said.

Announcing the plans, President Nayib Bukele, 40, said: “Invest here and make all the money you want.

“This is a fully ecological city that works and is energized by a volcano.

El Salvador in September became the first country in the world to adopt bitcoin as legal tender.

Likening his plan to cities founded by Alexander the Great, Bukele said Bitcoin City would be circular, with an airport, residential and commercial areas, and feature a central plaza designed to look like a bitcoin symbol from the air.

The tech-savvy president said: “If you want bitcoin to spread over the world, we should build some Alexandrias.”

In September, the president proclaimed himself “dictator” of El Salvador on Twitter in an apparent joke.

The president, who appeared on stage wearing a baseball cap backwards, said that no income taxes would be levied in the city.

The government will provide land and infrastructure and work to attract investors.

El Salvador planned to issue the initial bonds in 2022, Bukele said, suggesting it would be in 60 days time.

Samson Mow, chief strategy officer of blockchain technology provider Blockstream, told the gathering the first 10-year issue, known as the “volcano bond”, would be worth $1 billion, backed by bitcoin and carrying a coupon of 6.5%.

Half of the sum would go to buying bitcoin on the market, he said.

After a five year lock-up, El Salvador would start selling some of the bitcoin used to fund the bond to give investors an “additional coupon.”

“This is going to make El Salvador the financial centre of the world,” he said.

Bitcoin was originally created to operate outside government-controlled financial systems – but Bukele says it will help attract foreign investment to El Salvador.

Turgeon Out At Maryland, Danny Manning The Interim, And Who Will Get The Job?