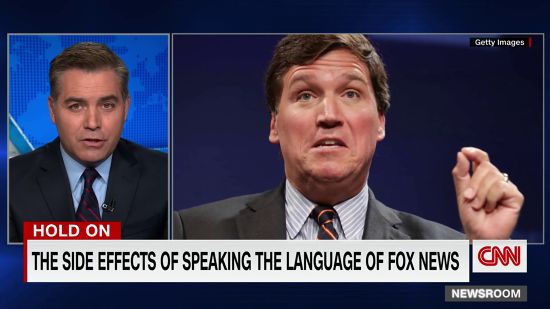 Jim Acosta never disappoints when he launches into his brutal and incisive monologues on his weekend news show, and Saturday's entry did not disappoint. Acosta has no qualms taking on the biggest sh*t-spewer in the media - Tucker Carlson - and he has given him a coveted award for 2021.

BULLSH*T FACTORY EMPLOYEE OF THE YEAR

Jim started with a look back at the year in FOX "News," calling it "The Bullshit Factory." Mocking Laura "Chiclet Teeth" Ingraham for her "Who's on First" bit, wherein she pretended she didn't understand that there was a TV show on Netflix called "You," to Jesse "Can't keep it in his pants" Waters, who suggested that "the recent concert tragedy in Houston had something to do with satanism." You know, referring to the Travis Scott/Astroworld nightmare wherein ten people were trampled or smothered to death in a crowd surge (which had literally nothing to do with satanism.)

How about Tucker insinuating that Vice President Kamala Harris isn't really "from this country in that sense" that she grew up in Canada, having gone to high school there. Does living abroad for a part of your childhood take away your nationality? Never heard of that theory, unless it applies only to Democrats, I guess.

Acosta bestowed this inaugural honor to Tuckems in this fabulous speech: