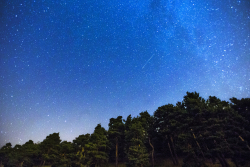 
Every year, beginning in mid-July, planet Earth commences passing through an enormous debris stream that extends for more than 15 million kilometers through space: the debris stream of Comet Swift-Tuttle. Plunging through our Solar System and making a close approach to Earth every 133 years, this comet provides the origin of arguably Earth's most notable meteor shower: the Perseids, which peak annually during the second week in August.

Love or Hate It, You Have to Respect the Sherman Tank