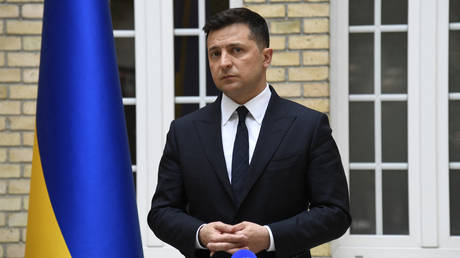 People living in the Ukrainian Donbass region who feel like they are actually Russian should leave the country and emigrate across the border because it will "never be Russia," Ukraine's President Volodymyr Zelensky has said.

Speaking to the Kiev-based TV channel Dom, in a video published on Thursday, Zelensky said it is a "big mistake" to stay in the Donbass if you don't feel Ukrainian. The president, whose initial electoral support base was in the east and south of the country, has become increasingly hardline, recently adopting a more nationalist stance.

The Donbass, made up of the Donetsk and Luhansk Oblasts, is located in the east of Ukraine, next to the border with Russia. It has been the location of a civil war since 2014, with separatists now controlling large swaths of territory. These republics are recognized by neither Moscow nor Kiev. However, since the start of the war, the Kremlin has been accused of having control over both self-declared states, with some suggesting Moscow eventually wants to make the region Russian territory.

"Without Ukraine, there will be no civilization on this territory. Ukraine will grow and build everything. And in the occupied part of the Donbass, nothing will grow anywhere. There will be no happiness for these people," he said.

According to the president, those who live in the region must decide if they are Ukrainian or Russian. He asked locals to choose – "is this your homeland, or are you a guest?"

"For the future of your children and grandchildren – if you love Russia… you need to go and look for a place in Russia," he noted.

Zelensky also appealed to Ukrainians in the region, expressing confidence that the area will one day return to the control of Kiev.

"If you feel that you are Ukrainian, stay there. This land will be de-occupied," he said.

Achieving peace in Donbass was a key promise of Zelensky's presidential campaign in 2019. So far, he has failed to fulfill this pledge, with domestic divisions making his task difficult.

Earlier this year, the Ukrainian president proposed a meeting with his Russian counterpart, Vladimir Putin, "anywhere" in Donbass. Speaking during a public address, he urged all parties to the conflict to keep to the agreed ceasefire.

"Ukraine and Russia, despite their shared past, look to the future in different ways. We are us. You are you," Zelensky said. "But this is not necessarily a problem; it is an opportunity. At the very least, an opportunity, before it is too late, to stop the murderous count of future war losses."

Sandhurst cadet, 21, ‘took her own life after alleged affair with instructors’ as Army launch probe into her death