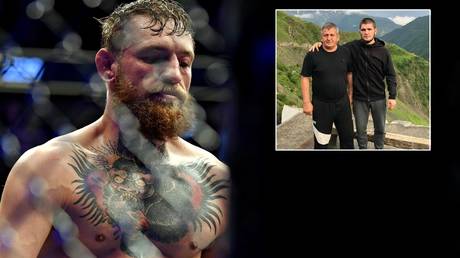 Conor McGregor’s deleted tweet targeting former UFC rival Khabib Nurmagomedov and his late father proves that the Irishman is “evil” and “dirty”, according to the Russian star.

McGregor caused disgust among the MMA community when he recently spewed out a series of insulting tweets directed towards his octagon rivals, including one which appeared to be aimed at Khabib and his father Abdulmanap, who died of complications stemming from a Covid infection last year.

“Covid is good and father is evil?” wrote McGregor, in what fans took as a response to Khabib’s message in the wake of the Dubliner's defeat to Dustin Poirier at UFC 264.

On that occasion, the Russian had tweeted “good always defeats evil” as he congratulated Poirier, who won via doctor's stoppage TKO after McGregor snapped his lower left leg.

“Like, when he’s talking about this, only evil can talk about your father, wife, kids, religion,” Nurmagomedov told Tyson and co-host Henry Cejudo.

“If you’re a normal human, you’re never going to talk about this stuff. For me, it’s like, I think he posted this tweet (when he has) drunk too much or done something.

“And the next day, he always deletes these tweets. When he becomes [back to] normal life, he’s like, ‘Oh, look what I did.’ Then he deletes. This is my opinion what he does all the time.”

After Tyson suggested “anything goes” in the fight game, Khabib responded: “I agree – if you want to promote the fight.

“But when someone is not with us, he is not even alive, this shows what you have inside. This shows how dirty you are.

“When you are one of the best in the world and you come and you punch someone who is like 70 years old, like an old man, this shows your heart.

“This shows who you are inside, how dirty you are. When you have parents and you have kids, how can you show yourself like this? I don’t understand why his close people don’t tell him, ‘Hey, what’s going on?’”

The undefeated Dagestani star – who famously choked out McGregor in their grudge match in October 2018 before launching himself at members of the Irishman’s team in the crowd – said The Notorious does not have enough people around him to keep him grounded.

“They just love you. I think he lose a lot of people around him. I don’t think he have people who were with him before when he become champion. Everybody needs someone who reminds you, ‘This is good, this is bad.’”

Khabib retired from the octagon undefeated after defending his title against Justin Gaethje last October and has since embarked on a coaching career, helping the likes of current UFC lightweight contender Islam Makhachev as well as family members Umar and Usman Nurmagomedov – who compete in the UFC and Bellator respectively.

McGregor, meanwhile, is nursing the broken leg which ended his bout against Dustin Poirier last month, leaving the former two-weight champion with a 1-3 record in his most recent visits to the octagon.

But the Irishman has remained defiant even as he faces a lengthy recovery, posting on Instagram earlier this week: “Ask me in the comments if I give a rats about a rat."

We are failing at teaching children financial literacy - David Curmi