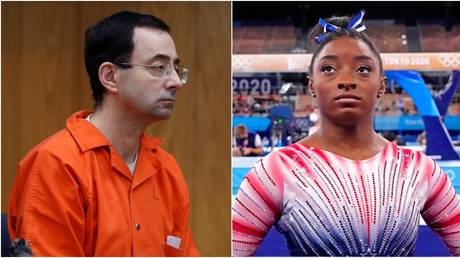 US gymnastics icon Simone Biles has said the sexual abuse suffered at the hands of jailed ex-team doctor Larry Nassar "probably" played a part in her backing out of various events at the Tokyo 2020 Olympics.

While citing mental health issues and a case of the "twisties" - a mental block that knocks a gymnast’s body and mind out of sync - the 24-year-old pulled out of the team final eventually won by the ROC before withdrawing from several individual finals.

Biles returned to competition on Tuesday, winning the bronze in the balance beam, but has since spoken to the media on possible reasons for her bowing out on the grandest of stages following huge success at Rio 2016.

"Now that I think about it, maybe in the back of my head, probably yes [that did affect me]," Biles told the “Today” show, regarding Nassar's sexual abuse.

"There are certain triggers that you don’t even know. And I think it could have [affected me]. I’m not exactly sure, it was just the craziest week."

Accused by over 150 women of molestation, Nassar was hit with 40 to 175 years' imprisonment in 2018 and will effectively die behind bars.

But the topic is obviously still raw for many, including Biles.

"I knew that still being the face of gymnastics and the USA and everything we’ve brought [against him], it’s not going to be swept under the rug," said the only one of Nassar's victims performing for USA Gymnastics to this day.

"It will still be a very big conversation. We still have to protect those athletes and figure out why it happened [and] who knew what when."

Amen sister. Simone Biles deserves a gold medal for getting out of bed every damn day after what Larry Nassar did to her. https://t.co/csfKSN8451

Elsewhere, another Nassar target in McKayla Maroney was forced to clarify reports this week that she had been forced her to compete on a broken foot at London 2012.

"When I was under ‘your care’ in Tokyo competing for Team USA at 15, and my parents weren’t allowed to stay in my hotel or see me in person," she wrote on Sunday, in a tweet aimed at USA Gymnastics and the US Olympic and Paralympic Committee.

"When I was all alone, naked, with Larry Nassar on top of me for 50 minutes [bawling]. Who’s fault is that?" she asked, of an incident which took place a the 2011 World Championship.

"Why did I have to walk the hallways of the hotel you booked me at 2am alone and get locked out of my room because my roommate Sabrina was asleep. I then told my teammates what happened the next day after practice with John Geddert in the car, and got yelled at," Maroney added, on the figure who committed suicide in February following charges of human trafficking and the sexual assault of a teenage girl.

So, @USAGym and USOC aka @TeamUSA

When I was under “your care” in Tokyo competing for Team USA at 15, and my parents weren’t allowed to stay in my hotel, or see me in person…
When I was all alone, naked, with Larry Nassar on top of me for 50min balling. Who’s fault is that?

"I was told to 'Shut the f*** up, and don’t ever say anything like that about Larry Nassar again' by an older teammate I looked up to," Maroney went on.

"That scared the hell out of me, so I listened, and didn’t say anything for a long time. I just suppressed it until it came up again in 2015."

"I think most elite athletes get so skilled at pushing through adversity and being mentally strong that we then push through unjust treatment. [Also known as] abuse," she further offered, while explaining that parents weren't allowed to visit their children during competition as they were seen as distractions, and that team members would get into trouble if they talked to them.

Then on Instagram, the gold and silver medalist in London said that she broke her foot "as soon as" she arrived in the UK capital for the 2012 Olympics.

"I also, two weeks before the Olympics, hit the back of my head so hard that my nose broke. A bone in my nose exploded to protect my brain from brain damage."

USOC was so hands off I didn’t even know I was under their care — Or that the Karolyi camp I trained at every month was an Olympic facility managed by them!!? To me It felt more like a gym in the middle of a forest, with limited food supply, and a doctor molesting me twice a day. https://t.co/mF5aIEqJmP

As the press was informed that Maroney was dealing with an old toe injury, the reality was a much more serious knock that risked ending her gymnastics career.

"It was actually my foot, the sesamoid bone in my foot was completely shattered and dislocated, and it hurt so bad," she said.

"I had to get a miracle surgery... and they told me I’d probably never walk in heels again, never do gymnastics again. Me competing at the Olympics was literally risking the rest of my gymnastics career."

Parents are seen as a distraction, we would get in trouble if we spoke to them. My mom would send me packages of food to my hotel in Tokyo, because I was starving. She did everything she could to help me.

According to Maroney, her coach yelled at her by saying: "Why are you being so dramatic? This is an old break."

"It wasn’t an old break. It was a fresh break," she insisted.

The media always spins stories incorrectly. Let me be clear, I was NOT forced to compete on my broken foot.
I never said that. I trained my whole life for THAT moment & it was an honor to compete for my country. I had zero doubt I could perform a great vault for Team USA & I did. pic.twitter.com/1Qbmh1PCke

Later, though, Maroney backtracked and took to Twitter again to say that: "The media always spins stories incorrectly."

"Let me be clear, I was NOT forced to compete on my broken foot. I never said that. I trained my whole life for THAT moment & it was an honor to compete for my country. I had zero doubt I could perform a great vault for Team USA & I did."

"As an athlete who did that for my country, it’s extremely offensive for the media to say I was FORCED to compete. As if wanted to quit, and go home? That vault was one of the best moments of my life, please don’t take that away from me," she pleaded.