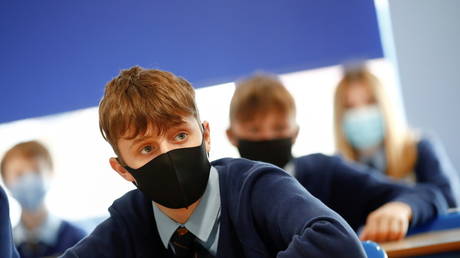 Many of Britain’s youngsters have shot down anti-vaxxers, sharing their readiness to get inoculated against Covid-19 after the government backed shots for teens and vaccine sceptics started the hashtag ‘leaveourkidsalone’.

On Wednesday, the UK’s Joint Committee on Vaccination and Immunisation (JCVI) recommended that Covid-19 vaccines should be open to 16 to 17-year-olds. The decision, which mirrors moves made elsewhere in the world, means around 1.4 million youngsters will be able to get inoculated against the virus before heading back to school in September.

Speaking on Wednesday, England’s Deputy Chief Medical Officer Jonathan Van-Tam told reporters that “there is no time to waste” in inoculating older teens. He suggested that it was more than likely that younger minors, those aged between 12-15, would also be able to get the shot soon.

However, the move clearly didn’t please everyone, with some in the anti-vax community once again demonstrating their opposition to the government’s coronavirus policy. “It’s no longer about flattening the curve, it’s an authoritarian regime wanting to control our freedoms,” one person wrote on Twitter, adding the hashtag ‘leaveourkidsalone’.

“I will stand strong with every parent to protect children from this ghastly experiment,” another social media user wrote, labelling the government as “evil bastards.”

However, Twitter’s sceptics were quickly put back in their place by kids, of all people. In tweets, liked and shared thousands of times, youngsters talked about their excitement in getting the vaccine and told anti-vaxxers to stop telling them what to think as they hijacked the hashtag ‘leaveourkidsalone’.

“Why don’t you take your own advice, and leave us alone,” one youngster wrote, adding his reaction to the government’s decision was “f**king finally.”

Others said they were old enough to make the decision for themselves without “some anti-vaxxer telling me how to feel.” One user wrote, “not having it when i’m able to would be selfish and put me and people around me at risk.”

Some said they were delighted to help protect their parents against the virus, even citing developments in vaccine technology, such as a potential intranasal shot, which they were excited about.

One parent said her daughter was getting the jab on her 16th birthday so that she could go and visit her grandmother in Ireland. Telling anti-vaxxers to jog on, she added “don’t impose your skewed beliefs on clued-up teenagers. #LeaveOurKidsAlone”

Having observed Britain’s youngsters almost totally drown out the anti-vaxxers, one Twitter user said she found the experience “uplifting,” adding that was a rare feeling from the social media “hellsite.” “‘I’m getting it and AntiVaxxers are f**king idiots’ has given me quite the boost,” they wrote.

The UK’s move to offer vaccines to teens is comparatively late, with many EU and developed countries already opening the jab to all adolescents. While some data suggest that the risk to youngsters is low, NHS England said on Thursday that more than one-fifth of all Covid-19 related hospital admissions are aged 18-34. While the adult inoculation rate in the UK is close to 90%, many in the younger age brackets have either not been fully vaccinated yet or have elected to abstain from the national campaign.

This Week In Games: September Ends With A Blast

Why Patriots Are In Dangerous Spot For Tom Brady, Bucs Clash