The racehorse with the most unwanted record in racing will fight to finally land her first win on Friday – at the 106th time of asking.

Celerity is officially the worst racehorse in British and Irish racing history. 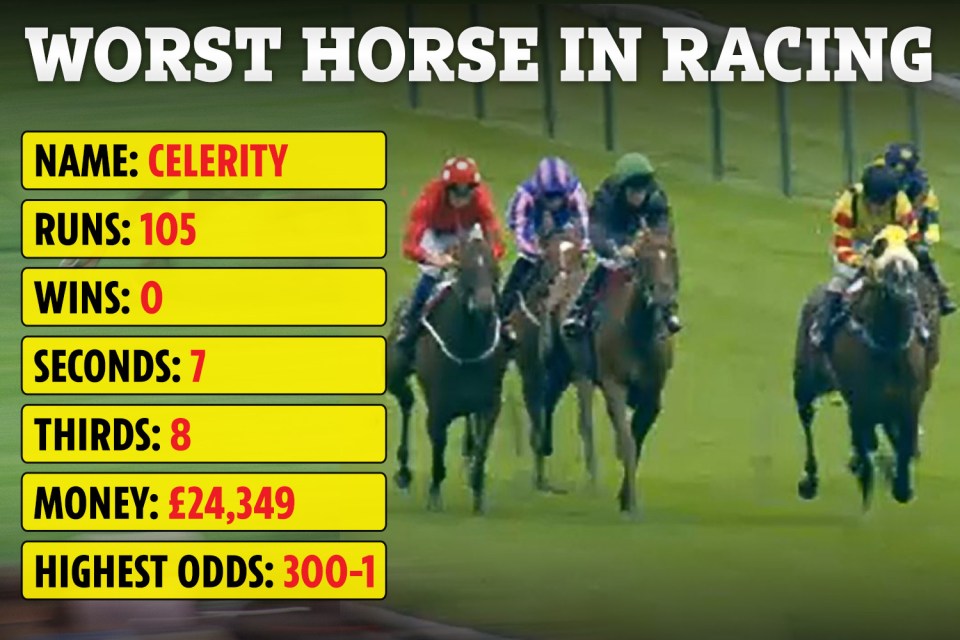 She has the longest losing run of any horse ever, with no wins in 105 starts.

The seven-year-old has finished runner up seven times, her nearest taste of victory being a half-length second-place finish at Ffos Las in July 2017.

She was ridden by Hollie Doyle, then a 3lb claimer making her way up the ranks, and went off at 5-1.

In a funny twist of fate, it was Doyle’s fiance Tom Marquand who got the better of her then, overtaking the doomed horse in the final quarter of a furlong.

The shortest the horse has been sent off since then is 4-1.

Basically, the bookies think the Lisa Williamson-trained horse has no chance.

And, on paper at least, they might be right.

But dig a little deeper and there is reason to believe Celerity could spring the mother of all shocks in the 5.52 6f sprint on Friday.

She was beaten just two lengths at odds of 200-1 at Chester last month.

The blanket finish meant that coming seventh of eighth did not look impressive, but the margin was really not that huge.

And it was even smaller in her next race at Haydock, coming a very respectable third at 50-1, losing out by a length-and-three-quarters to Boudica Bay.

There was another place finish on her most recent outing at Thirsk, meaning two of her eight lifetime third-place finishes have come from the past two races.

No wonder Williamson, who clearly loves the ‘incredible’ horse, is holding out hope for a miracle.

Williamson, who used to look after former Grand National winner Amberleigh House, told the Racing Post: “She’s definitely running better than she has been and she seems to be enjoying it a lot more.

“The owner is going to carry on with her as she gives him a hell of a lot of fun, she’s got a home for life and when she retires he’ll breed from her.

“She’ll be with us all the way through.

“The owner’s local so it’s nice to go to Haydock.

“She seems to run better in stronger races and how she’s never won a classified or a low-grade handicap I’ll never know.

“We’ll give it our best shot. The owner tried to put her in foal but she didn’t take, so she’s come back and if she were to win it’d be amazing.

“Celerity is a very funny horse. She’s a box-walker and I’d say she looks like a female version of a stallion, she’s huge.

“She looks incredible and she’s a real character, everybody loves her. We all adore her. She’s a yard favourite, big time.”

Celerity is not the world’s worst racehorse, though.

Dona Chepa, a mare from Puerto Rico, was beaten 135 times in a row.

She finished runner-up just once, third twice, and amassed meagre career earnings of just over £10,000.

Quixall Crossett was previously the worst horse in British and Irish racing.

Trainer Williamson says Celerity, despite her poor record, is an ‘incredible’ horse[/caption]

OFFERS OF THE DAY

Betfair – Min stake £5, min odds 2.0. Only deposits made using Cards or ApplePay will qualify. Free bets are awarded after the qualifying bet has settled, valid for 30 days, and must be used on multiples with 3+ legs. Max £20 in free bets. T&Cs apply. 18+ BeGambleAware.Org

Paddy Power: New customers only. Place your FIRST bet on any sportsbook market and if it loses we will refund your stake in CASH. Max refund for this offer is £20. Only deposits made using Cards or Apple Pay will qualify for this promotion. T&Cs apply. Paddy’s Rewards Club: Get a £10 free bet when you place 5x bets of £10+. T&Cs apply. 18+ Begambleaware.org

Most read in Horse Racing

Without a win in 103 contests, the horse, who actually gained a sort of cult following, was beaten 82 lengths on his third to last race.

On his final two outings he unseated his rider both times before the curtain was finally pulled down on his disastrous career.

Meet a single dad with $550,000 in student loans for his 5 children: 'I'm not going to take the chance of not sending my kids to school'