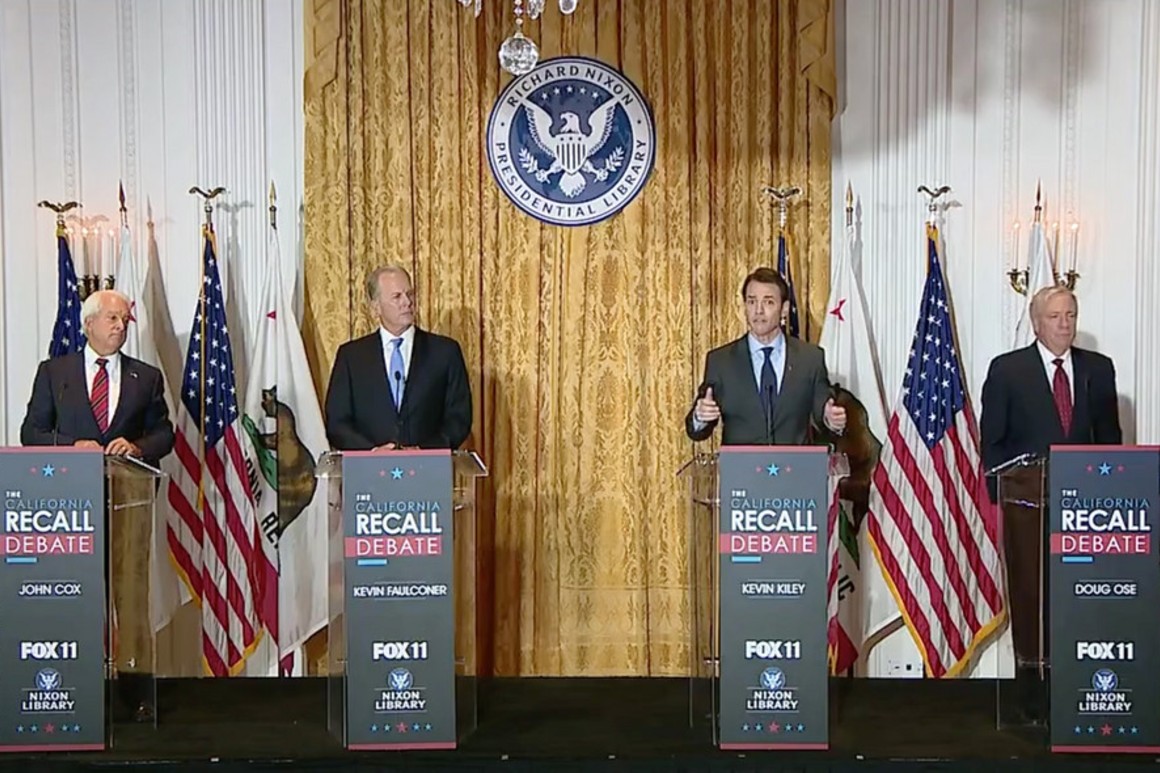 YORBA LINDA, Calif. — After months of skewering California Gov. Gavin Newsom on everything from Covid-19 response to homelessness, a quartet of Republican gubernatorial hopefuls formally made their case Wednesday to oust him from office at their first televised recall debate.

The 90-minute event at the Richard Nixon Presidential Library, hosted by Fox LA, allowed the four candidates to go toe-to-toe for the first time. With less than six weeks remaining until the Sept. 14 recall election, polls show the race is tight enough that Newsom could be ousted if he doesn't convince enough Democrats to vote.

Faulconer, the former San Diego mayor who was a frontrunner before Elder entered the race in July, focused on two issues where polls suggest Newsom may be vulnerable: crime and homelessness.

"Every California family deserves to be safe, feel safe and have a safe neighborhood. That is not a reality under Gavin Newsom’s California," Faulconer said. "We have a governor who won’t talk about it ... who supports the defunding the police movement."

Faulconer, who has made his city’s response to homelessness a linchpin of his campaign, said his own record on that issue "made a real difference in the quality of life of our city."

But it was Ose, a farmer and former Sacramento-area congressman, who appeared to win the crowd of GOP stalwarts in the Nixon Library audience with his folksy approach and snappy soundbites.

“We need to stop paying people to stay home," he added. "We need those people back to work."

Cox, whom Newsom defeated by nearly 24 percentage points in 2018, returned to many of the same themes and ideas that he put forward three years ago. He argued that he is “an outsider and a businessman" and that he would provide "common sense" policies, unlike the “politicians and celebrities."

“We need to provide common sense solutions ... not just throw up our hands and blame climate change," Cox said.

Asked whom he would fire as governor, Cox said he would clean house and there would be “no shortage” of places and people to consider.

He said the Department of Motor Vehicles would be another target. “We can go on and on," he said.

Kiley, the only current officeholder among the GOP candidates, repeatedly attacked Newsom's dealings in Sacramento, pointing to his signature on a bill restricting contractor employment and his use of emergency powers.

On immigration, Kiley said that the issue has “become untenable," and that "the sanctuary state is an example of that." And “we have done way too much in terms of expanding benefits” to undocumented immigrants, “something no other state has done," he added.

In a revealing moment, Faulconer pivoted toward bipartisanship when asked if he was still a Trump supporter.

“What happened on Jan. 6 was abhorrent to our country ... wrong in every way imaginable," Faulconer said. “What Gavin Newsom wants to do is to make this all about Donald Trump ... I’ve been very upfront about how it’s not about partisanship, it’s about leadership."

When pressed again if he would welcome Trump's backing, Faulconer said, “I would proudly take the support of any Republican or Democrat who wants to get rid of Gavin Newsom and make California a better state."

The candidates saved their toughest jabs for Newsom over the Covid-19 response, charging that his business closures, conflicting directives and changing standards damaged the economy and public confidence.

Faulconer said he strongly supported vaccinations but that the governor's approach to businesses and schools was haphazard and ineffective.

“When we went through last year — open and close, open and close — five and six different times," Faulconer said. "Then it went to color-coded charts ... it’s the type of stuff where you lose confidence."

Ose went further, charging that under Newsom, "the government is engaged in a significant overreach" on Covid vaccinations.

Newsom strategist Ace Smith responded on Twitter: "These Republicans at this debate are handing out maps for how to drive off the Florida Covid cliff — what a disaster."

In the end, the evening lacked for drama and any real clashes. Two of the most widely known GOP players in California’s historic recall, Elder and reality TV star Caitlyn Jenner, did not attend.

Jenner's campaign has confirmed that she went to Australia for multiple weeks, which media there have said was to appear on "Big Brother VIP Australia." Elder said Wednesday that he was attending a Central Valley fundraiser hosted by state Sen. Shannon Grove (R-Bakersfield).

Newsom rejected the invite for the GOP-sponsored event altogether. The event had a strong Republican tinge compared to past gubernatorial debates; it was presided over by conservative broadcaster Hugh Hewitt, the moderator and president of the Richard Nixon Foundation, and Robert O’Brien, who was national security adviser under President Donald Trump. Both infused GOP undertones in their questioning compared to two Los Angeles-based Fox LA journalists on the panel, Christine Devine and Elex Michaelson.

The debate occurred as the recall stakes have ramped up in recent weeks. A major poll from the UC Berkeley Institute of Governmental Studies and the Los Angeles Times last week showed that even in overwhelmingly Democratic California, voters are now nearly split on the recall of Newsom.

The numbers have alarmed Democrats and boosted calls for Newsom’s team to take a more aggressive stance to fire up his base as election officials prepare to mail ballots to millions of voters. Newsom’s team in recent days has targeted Elder specifically on Twitter, raising the specter of a Republican governor who this week reiterated his stance that there should be no minimum wage.