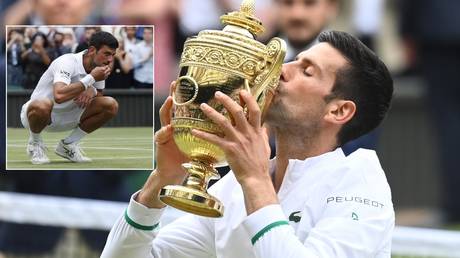 Novak Djokovic moved level with great rivals Roger Federer and Rafael Nadal on 20 Grand Slams as the Serbian world number one came from behind to beat Italy’s Matteo Berrettini to win the Wimbledon title.

Djokovic was forced to scrap by Berrettini, dropping the first set on a tie-break before surging back to win in four sets, 6-7 (4-7) 6-4 6-4 6-3 to pick up a sixth Wimbledon crown overall.

After claiming the Australian and French Open titles to start the season, the 34-year-old Serb is now eyeing a Calendar Grand Slam with the US Open coming later in the year, and before that could even add an Olympic gold medal at the Tokyo Games.

"I have to pay tribute to Rafa and Roger, they are legends of our sport and they are the two most important players that I ever faced in my career," said Djokovic after moving level with the Swiss and Spanish icons in the all-time Grand Slam stakes.

"They are the reason that I am where I am today. They helped me to realize what I need to do in order to improve."

At SW19 on Sunday, Djokovic was made to battle all the way by the 25-year-old Berrettini, who was making his Grand Slam final debut and was the first Italian – male or female – ever to reach a Wimbledon singles final.

After a nervy start from both men, Djokovic appeared to have the first set under control when he broke in game four.

Berrettini then saved set point at 5-2 down in an epic game lasting more than 11 minutes, before Djokovic spurned his chance while serving for the set as his rival broke back.

The Italian world number nine held his nerve to send the set to a tie-break, which he won 7-4.

Seemingly stirred into action, Djokovic earned a double break of serve in the second set before his rival threatened another comeback, rescuing one break back before succumbing 6-4.

A fired-up Djokovic then broke in game three of the third set, which proceeded to go with serve as the vastly more experienced Serb opened up a two sets to one lead.

With actor Tom Cruise among the assorted celebrities watching on from the full capacity Centre Court crowd, Berrettini was facing his own Mission Impossible to get back in the match despite some strong support for the Italian heartthrob.

A tight fourth set went with serve until Djokovic broke in game seven with a forehand winner.

Berrettini saved two Championship points on his serve in game nine, but was unable to do so a third time as Djokovic took the set 6-3 and a sixth Wimbledon title with it.

After his latest feat at at the All England Club – his third title in a row at the tournament – Djokovic collapsed onto his back with his arms outstretched before rising to embrace the beaten Berrettini.

The Serb then performing his customary celebration of picking up some of the Wimbledon grass and putting it in his mouth, savoring his success.

The triumph moved Djokovic into a three-way tie with Federer and Nadal in their tussle to end their careers with a record haul of Grand Slam titles among men.

Federer was among those to congratulate his rival, writing on social media: "Congrats Novak on your 20th major. I'm proud to have the opportunity to play in a special era of tennis champions. Wonderful performance, well done!"

As the youngest of the trio and showing no signs of relenting, Djokovic will now surely be favored to break his tie with Federer and Nadal and strive out on his own at the front of the pack.