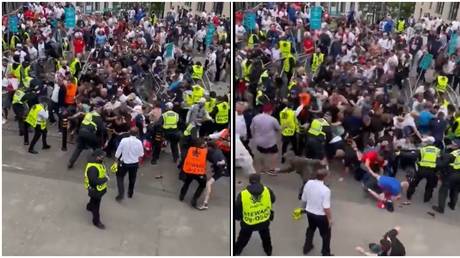 England fans have been captured on video fighting with security guards after reportedly breaking through barriers at Wembley, as reports spread of further trouble around London ahead of the Euro 2020 final with Italy.

By early lunchtime on Sunday, numerous reporters and users on Twitter had posted accounts of tempers starting to flare in several hotspots around London.

But as the afternoon progressed, with hours still to spare until the Three Lions begin their first major final in 55 years, the day out in the capital had already turned sour for many.

The Daily Telegraph's Sam Wallace described a "febrile atmosphere" near the iconic stadium, and said that stewards were "currently chasing people around".

"Not sure they’ll get all the way to the wine and canapés," he added.

Wallace allegedly saw another fan "jump down a 20 foot+ wall to try to get into the inner cordon near the media entrance", before telling officials he'd "had his ticket stolen".

To BBC Sport a Wembley spokesman confirmed: "We are dealing with an incident that occurred at the outer security perimeter area of the stadium, with support from police.

"Safety measures were quickly activated. There were no security breaches of people without tickets getting inside the stadium."

Before that, on Wembley Way nearby, scuffles had reportedly broken out with police rushing to the scene to diffuse the row.

Febrile atmosphere at Wembley. This is near the main entrance to Club Wembley a few minutes ago where it looked like a group of fans broke through the security cordon. Stewards currently chasing people around. Not sure they’ll get all the way to the wine and canapés pic.twitter.com/YTIx8eQLz2

More of this. It’s appalling. Not enough police and security guards being overwhelmed. pic.twitter.com/JMxtP2Ffzk

Outside the Box Park venue, there were also reports of a group throwing punches at each other, and then getting physical with fellow supporters before Met Police similarly calmed things down.

It hadn't been all doom and gloom there, however, as earlier Manchester United legend Rio Ferdinand had sung ‘Sterling’s on fire’ with punters.

On his Instagram, he shared a video and has also remarked: "No matter what happens today, it is [Raheem Sterling] Player of the Tournament for England, 100%.

"Sometimes it’s a little sweeter when you have trials and tribulations and a few setbacks in that journey to reach the Holy Grail."

On Leicester Square, where several arrests were made following clashes with police after the 4-0 win over Ukraine in the quarterfinals, someone dubbed it a "mess".

"England fans getting nicked for fighting England fans, a tree uprooted and chucked around for laughs. Don't get the attraction."

Further video footage backed such claims up and showed a venue that is usually the home of glitzy UK movie premieres left to look like a wasteland.

With many parts uninhabitable covered by a sea of rubbish, fans could be seen randomly throwing glass bottles into the air and at nearby pub windows.

When Did the Supreme Court Do Better?

'The perfect summer sweater": Over 8,600 reviewers raved about this top — now starting at just $15 at Amazon