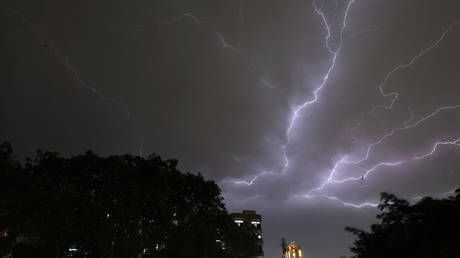 Dozens of people across three Indian states have perished in freak lightning storms. The government has promised to provide compensation for the families of the deceased and those who have been injured.

A total of 68 people have been killed in the deadly weather event, which hit Uttar Pradesh, Madhya Pradesh, and Rajasthan on Sunday, local media said.

There are scattered reports detailing casualties, but in many cases, the specific circumstances that led to the deaths have not yet been disclosed.

In the western state of Rajasthan, eleven people died after being struck by lightning near a watchtower at the famous 12th-century Amber Fort, police said. The victims were reportedly taking selfies near the tower when lightning struck the area.

Other deaths reported in Uttar Pradesh involved farmer laborers who were caught in open fields when the lightning erupted.

Prime Minister Narendra Modi has pledged around $2,600 for the next of kin of those killed by the lightning strikes, and approximately $670 for each person who has been injured. State governments also announced their own compensation plans.

The lightning storms coincided with India’s monsoon season, which runs from June to September. Videos posted to social media showed flash floods sweeping away cars as India suffers through the bout of extreme weather.

Flash floods due to heavy rainfall sweep away cars in #HimachalPradesh's #Dharamshala.

This comes after as many as 28 people were killed in #Rajasthan and #UttarPradesh due to lightning after heavy rainfall on Sunday. #rain #WATCH #video pic.twitter.com/pq5xjOVHFz

The Indian Meteorological Department has warned that more lightning strikes may come over the next few days.

Lightning kills a surprisingly large amount of people each year in India. More than 2,900 Indians perished from lightning in 2019, according to official figures cited by media.

15 of the best hotels in Texas, from old school luxury in San Antonio to Wild West vibes in Fort Worth

Why wildfire smoke can be worse than other air pollutants