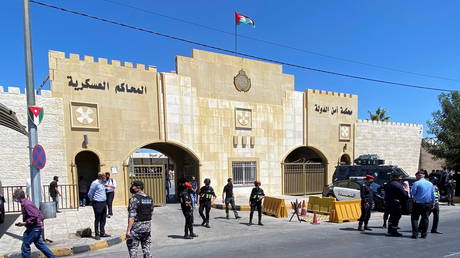 A court in Jordan has sentenced an ex-finance minister and the King’s distant relative to 15 years in prison for their role in a plot involving former crown prince Hamzah, the King’s half-brother, to unseat the country’s monarch.

On Monday, a Jordanian state security court ruled that Bassem Awadallah and Sharif Hassan bin Zaid were guilty of the sedition and incitement charges brought against them. The verdict, announced by Lieutenant Colonel Muwafaq al-Masaeed, a military judge, followed a closed-door trial that consisted of just six hearings.

The court said there was confirmed evidence that backed up the charges laid against the pair accused of having worked to harm the monarch. Awadallah and Zaid are said to have pushed for the former heir to the throne, Prince Hamzah, to be an alternative to his half-brother, King Abdullah II.

Awadallah, who was once a top aide to the King and also has American citizenship, pleaded not guilty, claiming he had nothing to do with the case. He had previously served as finance minister and was a driving force behind Jordan's liberalizing economic reforms. Zaid is a member of the royal family.

Awadallah and Zaid were detained along with 14 other officials in April this year after the scandal over the plot to depose the King came to light. Both supposedly attended a tribal meeting in which the King was criticized.

Prince Hamzah himself, who was stripped of his crown prince title by the monarch in 2004, was among the suspects and was put under house arrest. In a letter published by the media shortly after Hamzah’s arrest, the former heir pledged loyalty both to the King and to the traditions of the Hashemite dynasty.

King Abdullah II responded to the letter from the prince, who is not facing charges, and said he was pleased “the sedition has been buried,” but noted his “pain and anger” over the incident that rocked one of the region’s most stable monarchies.