ENGLAND reached their first major tournament final in 55 years at Euro 2020 only to fall agonisingly short on the lottery of penalties.

The brave Three Lions battled all the way to the Wembley showdown with Italy. 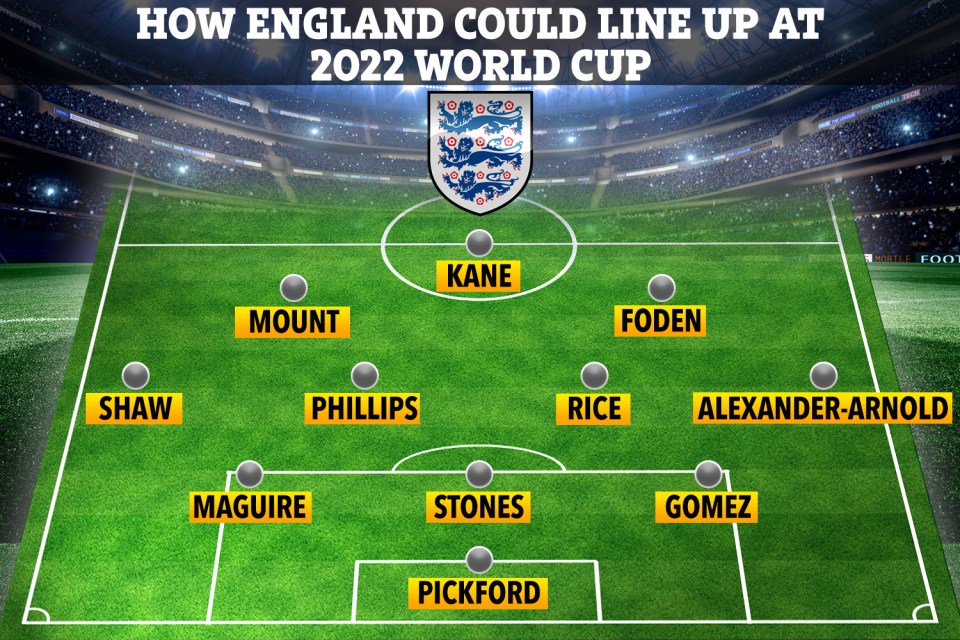 And despite failing to get their hands on the trophy, the future is certainly looking bright for Gareth Southgate’s men.

The England chief has confirmed he will stay on as manager for the 2022 World Cup in Qatar.

And with such a talented young group of players at his disposal, Southgate will hope that in 18 months they’ll be even more dangerous.

But how could England line-up at the tournament in Qatar next winter with so many talented players in the squad – and with injured players set to return?

Jordan Pickford had a sensational tournament at Euro 2020 – comfortably one of the best players of the summer for any nation.

The Everton man allayed all fears some fans had after a tough first-half of the season at Goodison Park.

Pickford will surely be the man between the sticks in Qatar, still only 28 when it comes around.

He was deputised by Aaron Ramsdale and Sam Johnstone at Euro 2020.

But Nick Pope and Dean Henderson – 30 and 25 respectively next winter – will likely be the other two goalkeepers in the squad.

They only missed out this summer due to injuries. 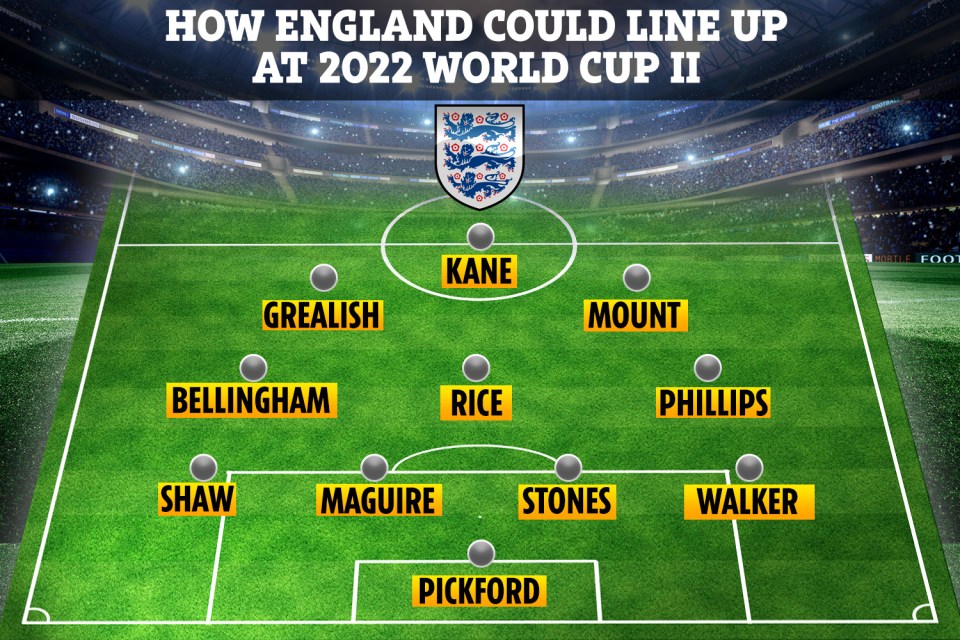 Southgate showed great versatility and tactical nous in playing both a traditional back-four and a back-three/back-five during Euro 2020.

Kyle Walker was excellent at right-back or on the right of a central three.

In the middle, John Stones, 27, and Harry Maguire, 28, continued to prove they could be a dominant partnership for at least two or three more tournaments.

Luke Shaw, 26, was on fire at left-back and left-wing-back, with Ben Chilwell, 24, not being given a single minute.

Kieran Trippier, 30, and Reece James, 21, were the other right-backs in England’s squad – and all will hope to make the squad for Qatar. 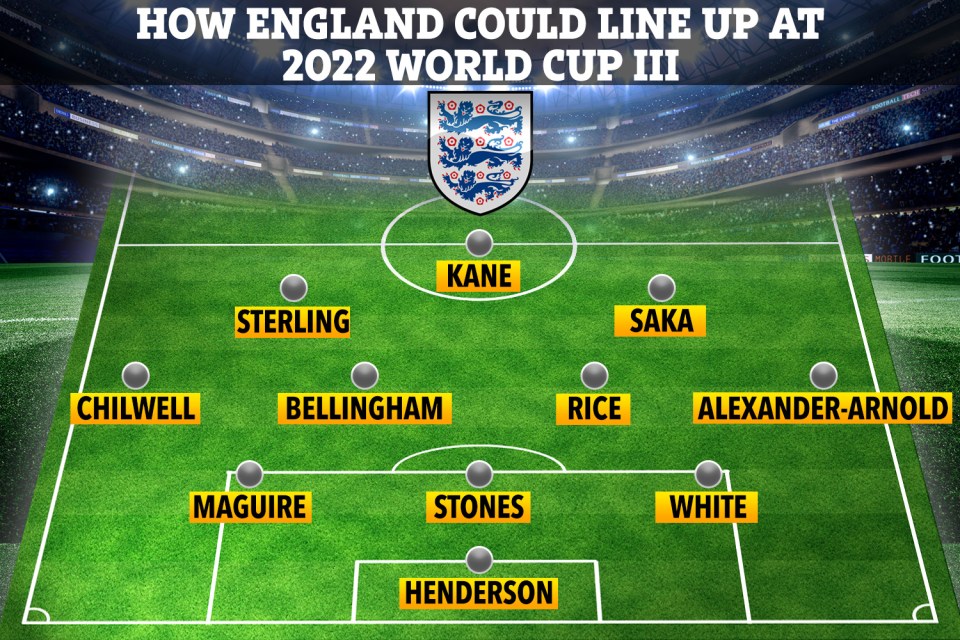 But Trent Alexander-Arnold, 22, could return to take a spot on the right of Southgate’s defence, particularly if playing a 3-4-3 / 5-2-3, having missed Euro 2020 through injury.

Tyrone Mings, 28, started the first two games before Maguire returned from injury, with Ben White, 23, and Conor Coady, 28, failing to get a look in this summer.

But they will likely make the squad in 2022, with Liverpool star Joe Gomez, 24, also set to return from a long-term knee injury.

Gomez’s height, pace and ability on the ball could see him challenge Walker – who will be still only be 32 next winter – on the right of a central trio.

Everton’s Ben Godfrey, 23, just missed out on a place in the final 26-man squad after making the provisional group and will likely be in the running next year.

Aaron Wan-Bissaka, 23, will also hope to get a look in, most-likely also the right-most player of a back-three, with Southgate not convinced by his attacking ability.

Kalvin Phillips, 25, and Declan Rice, 22, were arguably England’s standout players of the tournament.

Southgate was criticised by many fans after naming his starting XI for the opener against Croatia with both in a midfield three.

But their partnership was truly sensational and it’s hard to see them not starting for England for years to come – with the 2022 World Cup no exception.

They rightly kept Liverpool captain Jordan Henderson, 31, out of the team – and that’s saying something.

Mason Mount, 22, also had a strong tournament, playing as a No8, No10 and winger at times. 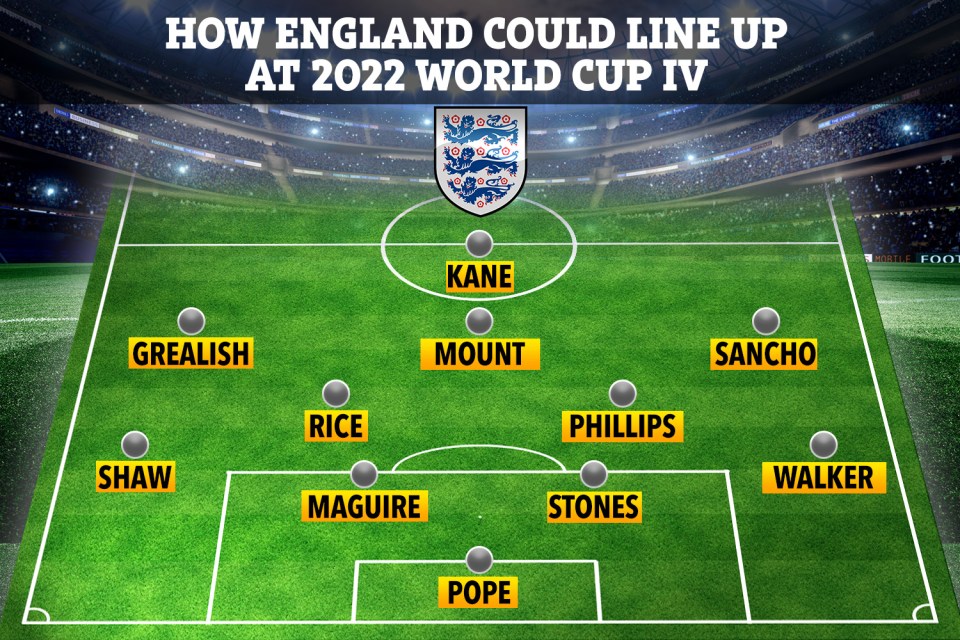 However, all three will have to be wary of the talented, even younger midfielders gunning for their spot in the team.

Jude Bellingham, 18, has proven his class with Borussia Dortmund and in brief cameos for England, with Phil Foden, 21, also potentially slipping into the midfield three after featuring at right-wing at the Euros.

Jack Grealish, like Foden, is another capable of playing on the wing, at No10 or in more of a No8 role and will hope to nail down a starting spot for 2022 after being limited mostly to appearances off the bench this summer.

But they will certainly be in the running in 18 months’ time, while Jesse Lingard, 28, will hope to continue his strong form to be considered.

Another candidate for a spot on the plane is Liverpool youngster Curtis Jones, 20, who showed great promise in 2020-21 as he carved out a role in the starting XI for the then-reigning Premier League champions.

In terms of centre-forwards, England are blessed with 27-year-old Harry Kane – but hardly have an embarrassment of riches in terms of depth.

Dominic Calvert-Lewin, 24,enjoyed a strong 2020-21 with Everton but barely got a sniff at the Euros thanks to captain Kane.

Ollie Watkins, 25, failed to make the final squad after being cut from the provisional group, but will hope to prove Southgate wrong in the coming 18 months.

Mason Greenwood, 19, was forced to withdraw from the squad through injury.

If the Manchester United star can keep up his progression, the lethal finisher could be a deadly weapon for Southgate in Qatar. 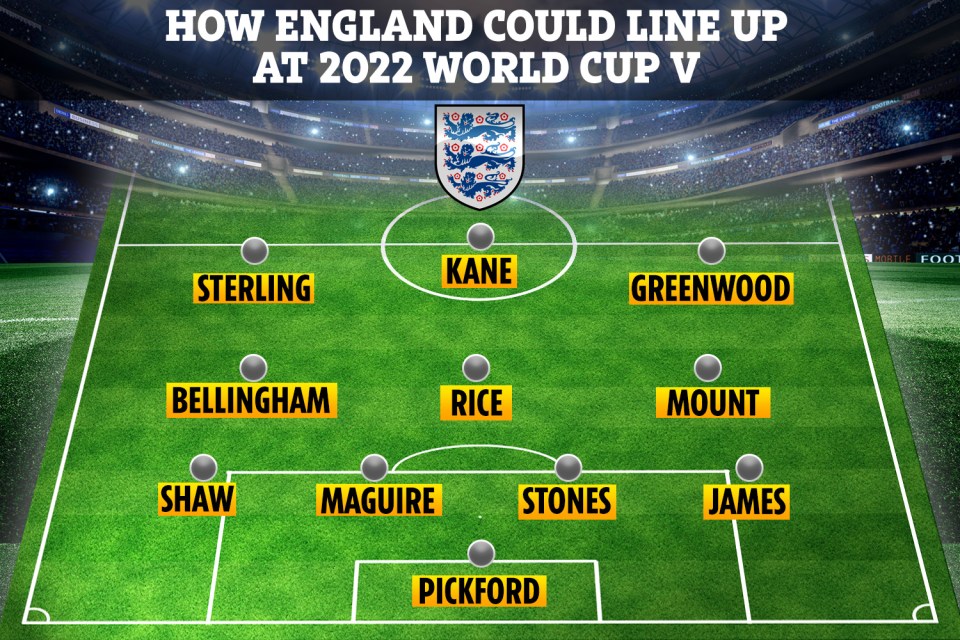 Tammy Abraham, 23, may need to secure a move away from Chelsea to be considered for an England call-up after slipping down the pecking order under Thomas Tuchel.

On the wings, Raheem Sterling, 26, had a sublime Euro 2020 and will almost certainly be on the plane to the Middle East next winter.

Marcus Rashford, 23, Bukayo Saka, 19, and Jadon Sancho, 21, are all still young and with another year-and-a-half of experience could help form one of the most dangerous attacks in the world.

Foden, Grealish, 25, and Mount will also vie for spots in the front-three if they fail to break into the midfield trio.

Leicester ace Harvey Barnes, 23, will also likely be in the running for a spot on the wing if he keeps up his solid progression.

Body of missing Utah boy Kache Wallis, 4, was found in his toy chest as cops reveal cause of death