HALVING the gap between coronavirus vaccines could make them less effective, one expert has warned.

Millions of jabs have now been given out across the UK and some centres have encouraged people to have their second four weeks after their first.

Millions of Brits are now fully vaccinated against the coronavirus[/caption]

Over 45.8 million Brits have had a first dose, with 34.7 million now also having had a second.

At the start of the pandemic, regulators urged a 12 week gap between jabs – which was mainly to allow more people to have a first dose, as supplies were short.

This advise was then updated to a gap of eight weeks between doses in order to get more second jabs out before Freedom Day on July 19.

Some vaccine centres have been trying to get people jabbed faster by urging people to come in four weeks after their first dose, in some cases this is so doses of vaccines don’t go to waste.

But Professor Adam Finn, of the Joint Committee on Vaccination and Immunisation (JCVI), has said pushing for a gap of four weeks could be the wrong decision.

He said: “I think we would need to be pretty careful about trying to change the approach right now in the middle of this third wave.

“There is of course an advantage in giving the second dose early, in the current circumstances with all the cases that we are seeing because you get a further boost,

“But the downside to that is the size of that boost is smaller and probably that will mean that the duration of protection you get from that second dose will be shorter.

“So there’s a sweet spot, and at the moment the advice we have given is we should not reduce the interval less than eight weeks.”

There are three jabs currently being rolled out across the UK, the Oxford/AstraZeneca, the Pfizer/BioNTech and the Moderna jab.

Previously studies have shown that the Pfizer and Oxford jabs work better when the doses are spaced out for longer than four weeks.

This is so the immune system can be primed to fight off the virus and the symptoms that come with it.

Cases in the UK are still growing and are expected to continue to grow when more restrictions are lifted later this month.

Data from the Wellcome Sanger Institute reveals that in almost every local authority of England, the Delta variant is the most prominent strain.

While cases appeared to have improved in some of the hotspots, they are now on the rise once again.

Cases per week are still highest in North West areas, where the Delta variant first hit.

Original hotspots like Bolton and Blackburn with Darwen had got caseloads right down but are now seeing a surge again.

Health Secretary Sajid Javid has already said case numbers could reach 100,000 per day in the summer as measures are eased, while Boris Johnson has warned of 50,000.

Currently an average of 26,500 people are being diagnosed with Covid each day. But there will be many more without symptoms.

The rate of new cases of coronavirus in most areas of England is now back at levels last seen during the winter. 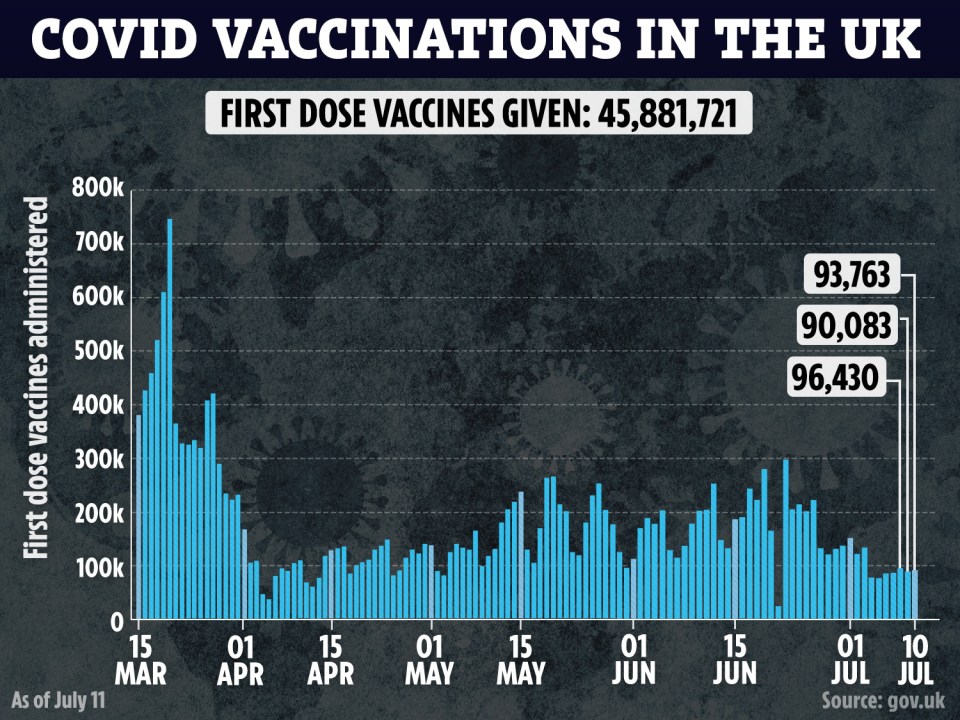 Third Covid wave ‘may have PEAKED’ but HALF of cases in jabbed, expert says

While Prof Finn said a second dose is better spread apart, he did add that if cases continue to spiral then pushing doses to four weeks apart could pay off.

He added: “Vaccination is not really a very good tool for dealing with fire in the house once the fire is really going, it’s much better as a way of stopping the house from being inflammable.

“Trying now to deal with the problem we have got with vaccination is really very difficult because it takes time to give those doses and after you have given them it takes time for them to take effect.”

The JCVI is set to reveal advice in days on whether or not the jabs gap should be cut.