THERE’S a chance to see Mars, the Moon and Venus lining up near each other in the sky this evening.

Stargazers will need to look to the western horizon just after sunset. 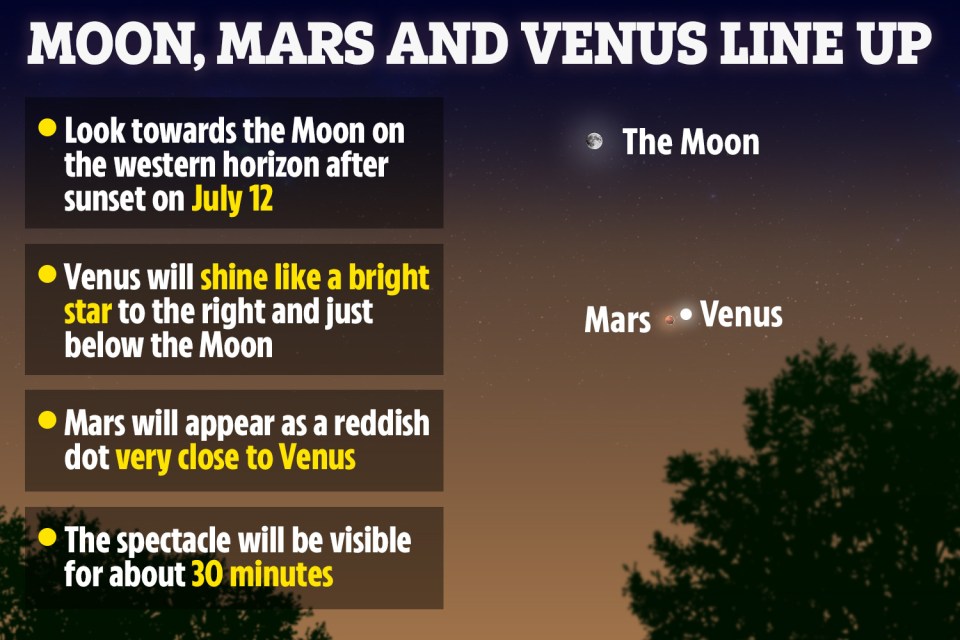 Venus and Mars will appear beneath the Moon this evening[/caption]

How to spot the Moon, Mars and Venus

Weather depending, you should be able to spot the Moon first.

It will look like a thin slim crescent in the western sky just after sunset.

Venus will shine like a bright star to the right and just below the Moon.

Mars will appear as a reddish dot very close and to the right of Venus.

The spectacle will be visible for about 30 minutes after dark.

It’s best to be in a location with little light pollution.

Sunset in the UK this evening will be around 9:15pm.

It will set just before 9pm in the East Coast of the US.

Try checking out the precise sunset time for your location so you don’t miss your chance to see Mars and Venus line up.

The planets will set about half an hour after sunset so you’ll need to be quick.

They should be visible with the naked eye but you could try using binoculars for a closer look.

When is Richard Branson's Virgin Galactic space launch and how can I watch it?

OF MEAT AND MEN

In other news, Richard Branson has made history at the weekend after successfully reaching space in his commercial Virgin Galactic spaceplane.

Scientists have identified the place where aliens are most likely lurking in the Milky Way.

And, Aliens may have dropped life-detecting sensors onto Earth, according to a Harvard University professor.