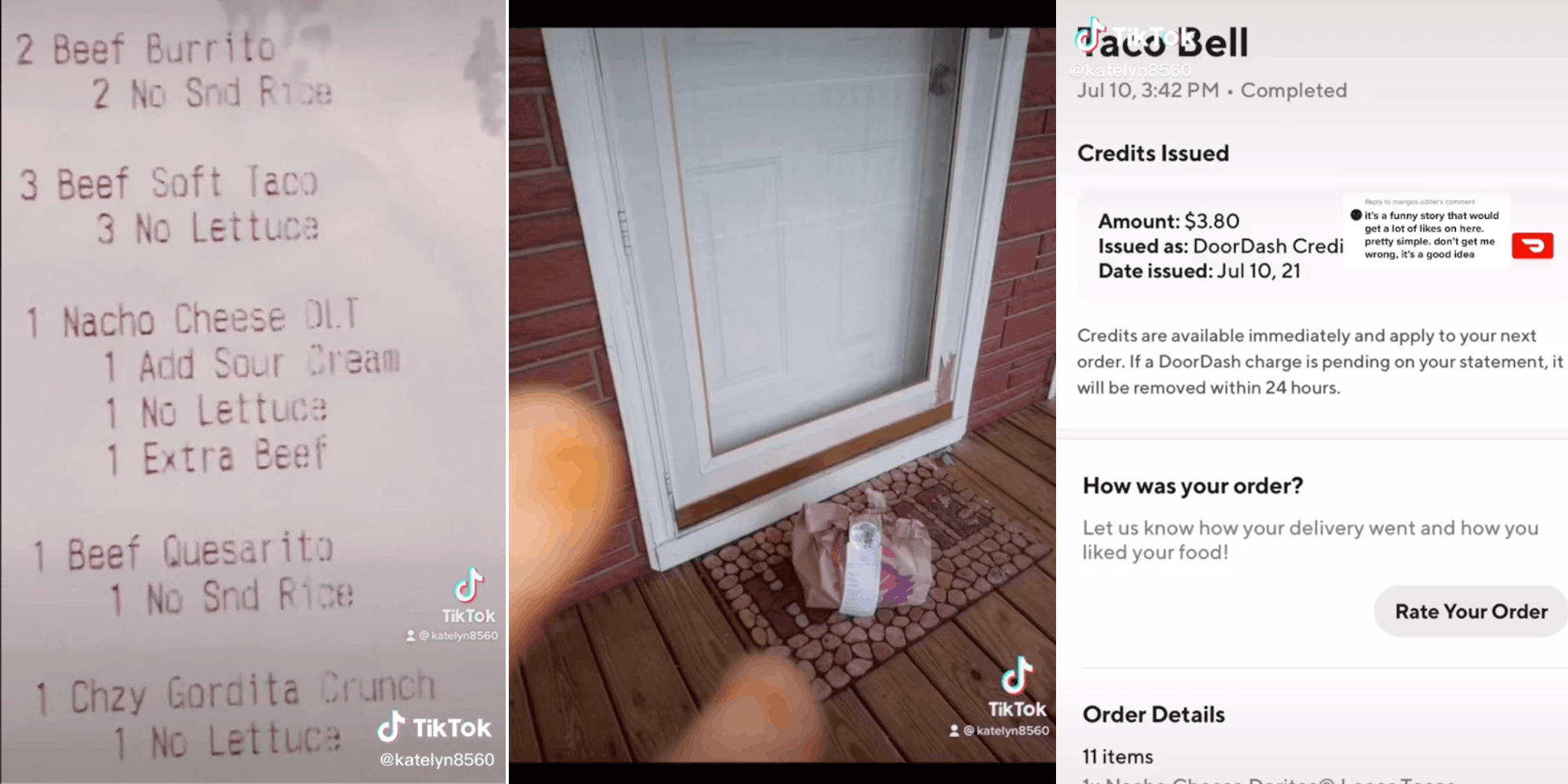 A woman’s taco was missing from her DoorDash order, which was no big deal, until “evidence” suggested the taco was eaten by the DoorDasher herself.

In a TikTok posted on Saturday, @katelyn8560 shares her DoorDash receipt from Taco Bell. She says when the food arrived at her door the bag was ripped, but she didn’t think much of it because “things happen.”

However, when she went to divide the food up for her family members, she noticed that her own food, one Doritos Locos Taco, was missing from the order. Also “common, happens all the time,” she says.

“Not really gonna worry about it, just gonna go ahead and get me a little refund, call it a day,” she says about the missing taco.

But then she was sent the drop off photo by her DoorDasher.

The photo shows a slightly crumpled bag of Taco Bell sitting in front of the customer’s door, but the photographer’s fingers are in the shot, appearing to be covered in an orange residue.

Some alleged DoorDashers commented on the video:

“Please get her fired so us honest dashers get more work 😂,” wrote @phenomenal_anomaly.

“As a dasher the seal should never be broken. 😳 That’s what’s it’s for is so you know nobody is messing with your food,” said @stoney_barbie420.

“I do ubereats and I was gunna say hey tacobell is constantly missing stuff but no...that’s definitely dorito dust 😳😂,” added @smashcat007.

Other people said similar things have happened to them while using food delivery services:

“My dasher ate our subs sandwiches in their car in front of our house then marked it as delivered and drove away 😂,” commented @deejammette.

The TikTok now has 672,000 views, and @katelyn8560 assured everyone that the DoorDasher was tipped 30 percent.

Another user, @mangos.udder, accused the TikTok of being fake.

"It's a funny story that would get a lot of likes on here," they commented.

The original creator responded by posting another TikTok, which shows the full message and DoorDash reimbursement for the missing taco.

This is not the first time a customer has claimed a DoorDasher ate their food. The Daily Dot previously reported on one Dasher who took off with a bag of food after taking a picture to prove it was delivered.

The Daily Dot reached out to the TikToker for comment.