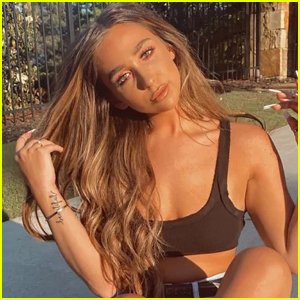 Ariana Biermann is clapping back at the haters.

On Friday (July 9), the 19-year-old daughter of reality star Kim Zolciak-Biermann took to her Instagram Story to address all of the speculation surrounding her weight loss, with many people claiming she has an eating disorder.

“I’m so exhausted by everyone thinking I lost 50 pounds overnight,” Ariana wrote. “I do not have an eating disorder. I worked my ass off to get to were [sic] I am today. I am not sick.”

Ariana said that back in January 2020 she weighed 167 pounds, and then devoted herself to “really working out, eating healthy.” She added that she is “now 118 over a year and a half later.”

“I wish I could give y’all some insane secret to get skinny overnight but I cant,” Ariana continued. “That’s not what I did. I ran 3-5 miles a day with a waist trainer on in 90 degree weather.”

Ariana described her weight loss journey as “hell,” explaining that she started going to the gym, counted calories, and cut out soda and snacking.

“It is a process,” Ariana said. “It takes time, but believe in yourself and do it for you.”