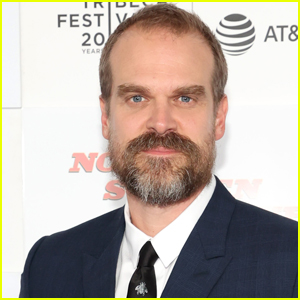 While promoting his new movie Black Widow, the 46-year-old actor teased some new insight about the upcoming season of his hit Netflix series.

“This season is so enjoyable, it’s epic in a scope that we’ve never had. Enjoyable is a strange word: It wasn’t easy,” David shared with USA Today.

Back in February 2020, Netflix revealed in a teaser for the upcoming fourth season that David‘s character, Jim Hopper, is still alive despite the cliffhanger season three finale.

“It was a lot of cold nights, we’re out on locations in crazy snowy environments sometimes and in actual prisons (in Lithuania),” David continued. “And also even where Hopper is in his life, he’s in a dark, fragile, vulnerable place, to the point where he has a shaved head and he’s like a baby almost.”

David added, “He’s discovering himself and what he is, and we also are going to see a lot of dark backstory from Hopper that we’ve only hinted at. It’s not ‘happy’ enjoyable, but enjoyable in terms of eating a hearty meal.”

Last month, it was announced that four new characters will be joining season four of Stranger Things! You can meet them here.

As of right now, season four of Stranger Things doesn’t have a release date.

Billionaire jailed for ‘picking quarrels’ with China over human rights