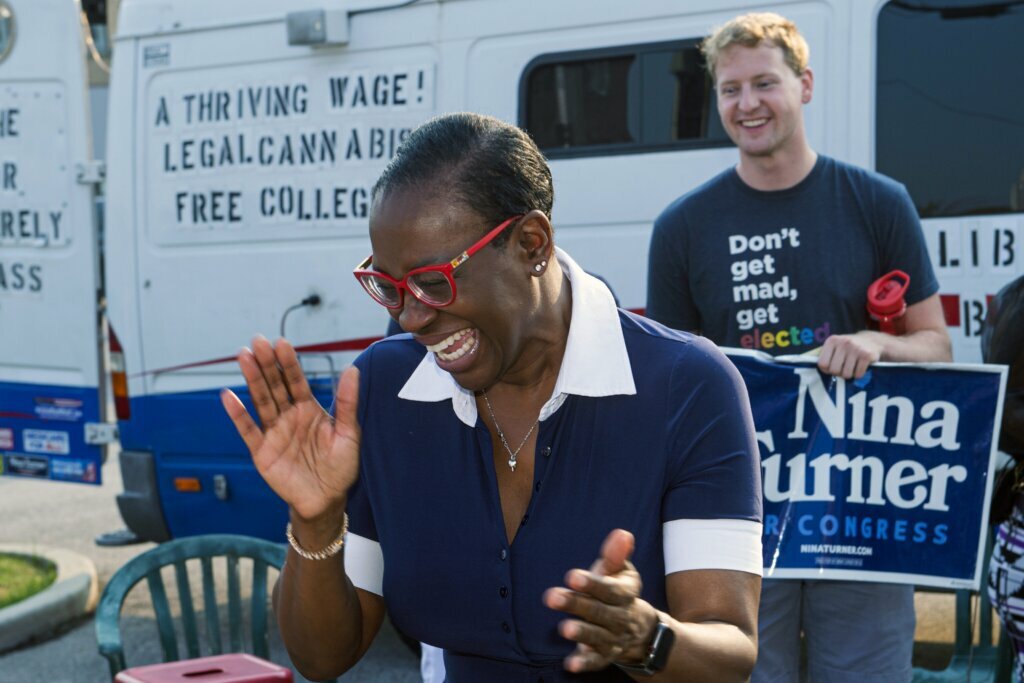 CLEVELAND (AP) — Amid relentless sunshine and intensifying humidity, Nina Turner led a small procession of voters last week to a polling place on Cleveland’s east side, guiding the group down a long block to the crosswalk even though darting across the street would have been easier.

“We don’t want you breaking the law,” an aide admonished. “Let’s go down to the light.”

Turner built a national reputation as a leading voice for Bernie Sanders’ presidential campaigns, bringing crowds in packed auditoriums to their feet with rousing calls for universal health care and bold action to combat climate change. But as she faces an election of her own next month, Turner is focused on more mundane aspects of campaigning, like avoiding jaywalking as she encourages supporters to vote and offering reassurances that her brand of politics still has a place in the Democratic Party.

“Something I can add, whether mainline Democrats get this or not, is I can speak the language of people from all walks of life,” Turner said in an interview. ”That is important for the expansion of the Democratic Party.”

Turner is the best known of more than a dozen Democrats vying to replace former Rep. Marcia Fudge, who left Congress to become President Joe Biden’s housing chief. The Aug. 3 primary is shaping up as one of the final tests this year for progressives, who have faced setbacks in other races, including Democratic primaries for Virginia governor and New York mayor.

With just a six-seat advantage in the House, some Democrats are taking aggressive steps to blunt Turner and back more centrist alternatives.

Federal rules prohibit Fudge from endorsing in the race, but her mother appeared in a commercial for Brown.

While the contest is emerging as a proxy for the future of the Democratic Party, local leaders say voters are more worried about issues like creating jobs, addressing crime and improving access to health care, which remains elusive for many, despite Cleveland’s high concentration of major hospital chains.

“People are trying to make this like it’s moderate versus progressive. I don’t see it that way,” said Cleveland Councilman Blaine Griffin, who has endorsed Turner but is friends with everyone running. He added that, regardless of ideology, no one “likes poverty, speeding cars down the street, bad roads or bridges.”

The district is shaped like a hatchet with an oversize head, snaking from Cleveland to Akron, nearly 40 miles to the south. The population is 53% African American, and nearly a quarter of residents live in poverty. The winner of the primary in the solidly blue district will likely cruise to victory in November’s general election.

A 53-year-old community college professor, Turner served on the Cleveland City Council, was a state senator and ran unsuccessfully for Ohio secretary of state before crisscrossing the country with Sanders during his 2016 and 2020 presidential bids.

Her signature phrase, “Hello, somebody!” became a campaign fixture, prompting crowds across the country to yell back with delight. But those who worked with Turner years ago in Cleveland remember her for another catchphrase, “Do you feel me?” which she first used addressing audiences of otherwise unresponsive young people.

As she talks to voters, Turner explains her support for universal health insurance coverage under “Medicare for All” by pointing to the experience of her mother, who was uninsured and died when she was just 42. Turner also says she wants student debt eradicated because she knows its sting: She and her son owe nearly $100,000 combined in loans she’s still paying off.

But the hard-fought presidential primary between Biden and Sanders has left some lingering resentments. The advocacy group Democratic Majority for Israel has produced ads seizing on Turner once likening supporting Biden to being forced to eat excrement.

Brown has pointed to such moments to argue that she will be able to accomplish far more, far quicker in Washington.

“I don’t have to start with a long letter of apology,” Brown said from her campaign office in a onetime pet store. “I can just walk in the door with good relationships and get to work on behalf of the constituents.”

The Rev. Aaron Phillips, executive director of the Cleveland Clergy Coalition, blames Sanders and Turner for so dividing Democrats, which he says helped Republican Donald Trump win the presidency in 2016.

Brown, meanwhile, “has been a faithful Democrat all of her life,” Phillips said. “She has never varied.”

Turner says she remains a proud progressive. And while some like-minded candidates haven’t won their races lately, she said they are nonetheless “moving the narrative in this country.” The cargo van that serves as her mobile campaign office is emblazoned with the slang phrase “corporate Democrat want a puppet.”

As Turner briefly hung out in the van’s shade after the walk to the polling place, Sam Cooke’s “Everybody Loves to Cha Cha Cha” blared over the speakers, and she started dancing.

“I can do this. But no singing,” she said, laughing. “There are people with that talent. I am not one of them.”

The Rev. Regis Bunch of Cleveland’s Fifth Christian Church said Turner makes personal connections with voters and insisted most aren’t scared away by big progressive goals, which he said “are not as far off as many believe.”

“We need something more wide than this liberal paradigm we’ve been living in,” said Bunch, 34, who said he supported Sanders in the primary and only voted for Biden last fall “by force.”

Turner nonetheless denies that she’ll be a congressional provocateur, arguing that she worked well with both parties in the state Legislature. She’s also aired TV ads promoting her past work as the Ohio Democratic Party engagement chair.

Brown counters that she can actually achieve the kind of bipartisanship Turner only talks about.

“I feel like the ‘all or nothing’ approach ends up with nothing. So we have to be able to find compromise,” she said. “Being a partner doesn’t mean being a puppet.”