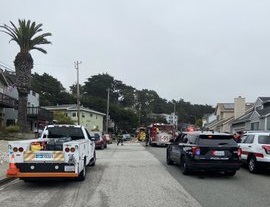 PACIFICA — The cause of a single-alarm house fire Sunday that displaced three residents and a pet is under investigation, authorities said.

In a statement, a North County Fire Authority spokesman said firefighters responded just before 3:20 p.m., to reports of a structure fire in the 200 block of Winwood Avenue.

Six fire companies, accompanied by three chief officers and a fire investigator, arrived to find heavy smoke coming from a two-story single-family home. After checking to make sure no one was inside, firefighters set up hose lines and worked to contain flames to an origin point.

Officials said the residents and a pet were not home when the fire began and were able to make their own relocation arrangements. There were no injuries to firefighters or residents.

Although the cause remains under investigation, officials sought to remind residents of smoke-alarm maintenance.

Structure fire in Pacifica this afternoon. Engine crews contained the fire to the second story of the residence. pic.twitter.com/KtI9yt9wfr