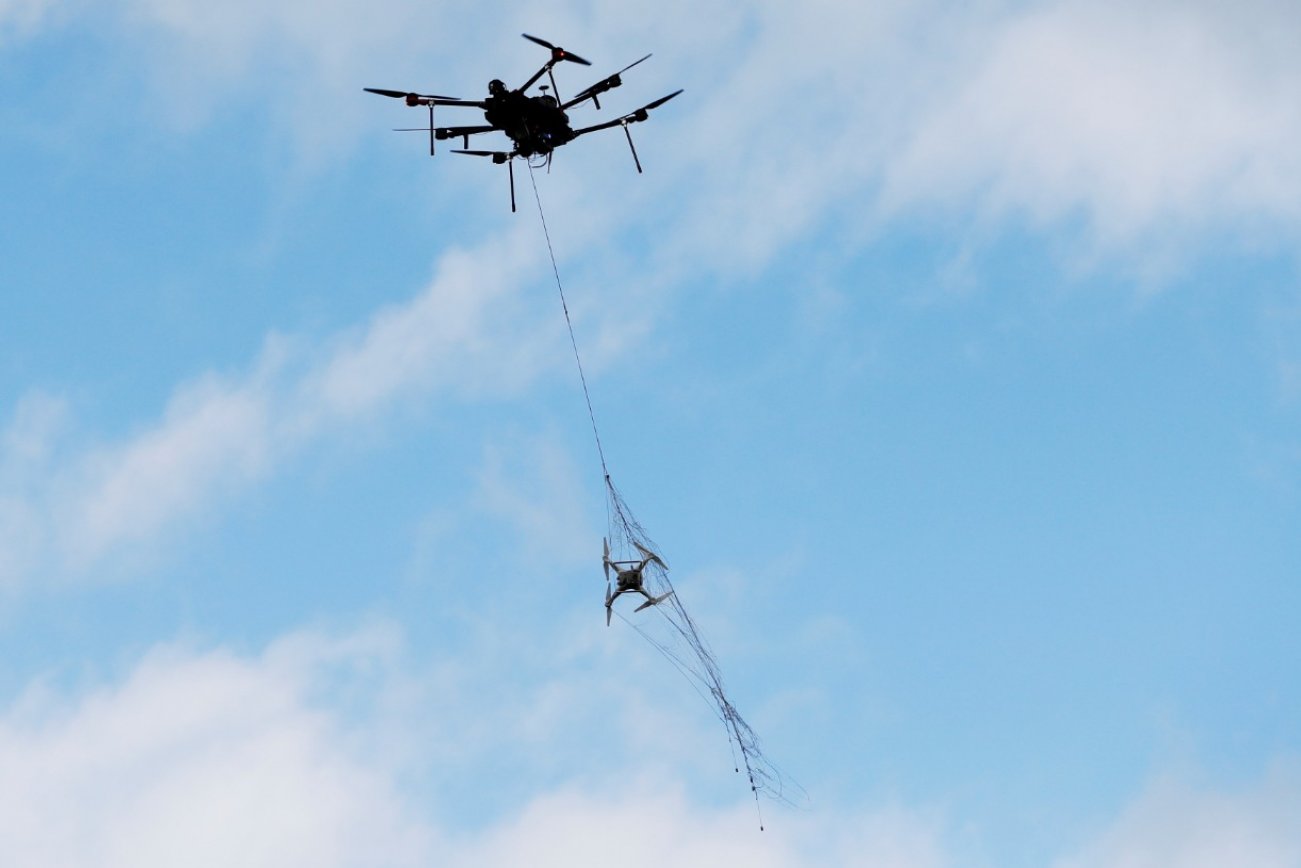 A net-like configuration on a separate drone, it appears, might be aimed at disabling, stopping, or even fully capturing an intact attacking drone.

Here's What You Need To Remember: Could specialized drone-launched nets help Moscow secure, and later hack into, enemy drones?

A Russian research institute is working to patent a new drone “net” designed to detect, track and capture enemy drones as a way to disable them from attacking or conducting surveillance missions. It is an interesting development which may signal an as-of-yet unprecedented innovation aimed at bringing new counter-drone weapons to the Russian military.

A net-like configuration, it appears, might be aimed at disabling, stopping or even fully capturing an in-tact attacking drone. The specifications of the new drone are explained in an essay from TASS, a Russian news agency.

“The interceptor drone ‘consists of the body frame with at least two engines with variable angles of rotation placed along its perimeter.’ The drone’s specific feature is that “an aerodynamic structure consisting of a catching net is integrated into the frame’s hollow space,” according to the patent application,” the TASS story writes.

The drone, being built by Russia’s government-operated Rostec corporation, is according to the article intended to supplement other drone defenses such as killer-interceptor drones and electronic warfare systems. This new innovation is intended to essentially “catch” and trap an enemy drone.

“The net’s size and surface tension allow for capturing and retaining the target while the net’s tension is regulated by turning an automatic coil winder to change the length of the line stretched along the frame’s perimeter and holding the net with the captured object,” the TASS essay explains.

This kind of drone defense seems to offer a potential intelligence opportunity as well, given that it might enable a net of sorts to capture a functional, undamaged drone for scientists and engineers to examine. That would seem to be part of the calculus or rationale for building the new drone. Also, such a technology might serve as a supplement or complement to existing electronic warfare techniques intended to jam, thwart, disable or even “take over” the flight path of an attacking drone. Perhaps electronic warfare options are less available in a certain tactical situation, or have proven ineffective, yet military commanders would still like to stop and capture an enemy drone without exploding or destroying it. The drone would need some kind of release or firing mechanism with which to shoot out a net to capture the enemy drone, and of course also rely upon some kind of sensor or targeting guidance. It would therefore make sense if the drone were configured, at least to some extent, in a manner somewhat analogous to armed drones.

A drone-net approach would fall within the non-kinetic realm of options, which could also prove tactically useful in urban or otherwise populated areas where explosive debris or fragmentation might create unintended damages.

This drone-firing net could also offer new defensive opportunities given that existing drone data links are being increasingly hardened, a circumstance making drone jamming or drone take-overs more challenging. The United States, for instance, has in recent years been working on information assurance technologies intended to safeguard drone feeds and various kinds of surveillance networking technologies from hacking or enemy intrusion, making them of course more resilient. Should an attacking drone essentially be less “hackable,” then a capture net might prove useful should there be an ability to track flight trajectory and engineer proper targeting and projection of a net.

It’s all to play for on the final day of Bicton’s CCI4*-L: here’s the course they will have to conquer *H&H Plus*

A Sad Fact: Stimulus Checks Made Sure Some Americans Did Not Starve