An uninsured and unroadworthy car was pulled over by police in North Yorkshire – who then discovered that nine people were hiding inside.

Officers said a crash involving the Skoda Octavia would have caused ‘absolute carnage’ after being baffled by the scene in Malton last week.

Video footage shows passengers getting out of the car one by one – with some emerging through the boot, because two of the doors were not working. One of the hatchback’s tyres was so bald that the inner cord was visible, police added.

Officers had pulled over the car after records showed it had no insurance.

But they were met with five people crammed into the back three seats, along with the front seat passenger and driver.

And, as the scene plays out, one passenger opens the boot to reveal two more people, as a policeman watches on.

A North Yorkshire Police spokesman said: ‘If it had been involved in a collision, the consequences don’t bear thinking about. 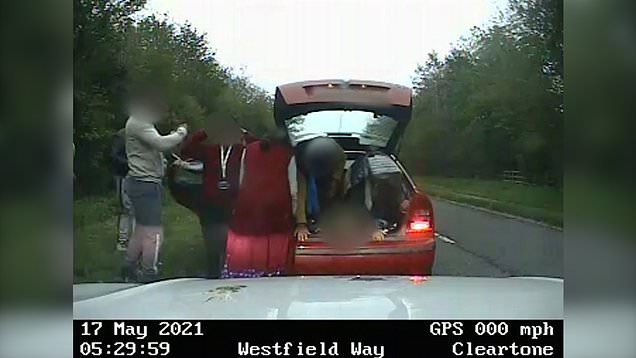 ‘It would have caused absolute carnage.’

The vehicle was seized and the driver was reported for dangerous driving and having no insurance.

‘We always expect the unexpected when we stop a vehicle… But this one took us totally by surprise.’

The spokesman added: ‘We’re continuing our targeted road safety deployments throughout the summer and beyond, to keep everyone safe and take illegal drivers and vehicles off the road.’

A home warranty protects your appliances, but it's not a substitute for homeowners insurance