A swan thought to be the oldest in the UK is marking his 30th birthday with a bird-friendly cake.

Pickles, who lives at Leeds Castle in Kent, is its most senior resident and also believed to be the oldest of his kind in the entire country.

He is a whooper swan – a large white swan with a long thin neck and black legs, and has a black and yellow beak.

As this year is an extra special occasion, he is being given a cake made out of bird seed to share with his mates.

A Leeds Castle spokesperson said: ‘Staff celebrate “Pickles Day” every year, often there will be a chorus of happy birthday shouted or sung to Pickles from the bank of the Great Water, but this year warrants a special celebration.

‘Pickles will enjoy his very own birthday swan food cake with his feathered friends.

‘Being an older swan, he is treated slightly differently as he’s not a big fan of eating with all the other swans. He much prefers his own bucket of food on the bank, next to a bucket of water to wash it down with.

‘Perhaps he’s a little spoilt, but being the oldest swan, he certainly needs a bit more care and attention.’ 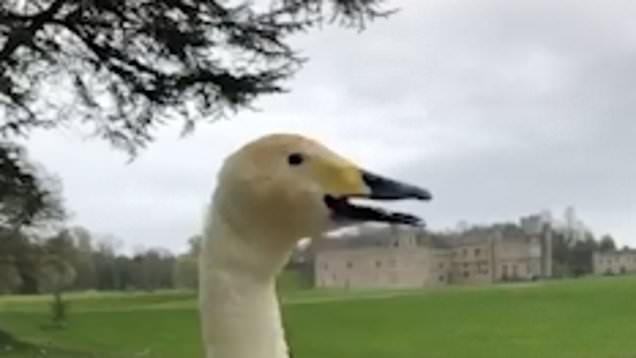 Pickles is easily spotted by his loud honking call and his comical run towards his favourite member of staff, Hannah, who he seems to have taken a special liking to.

‘He can often be seen having cuddles with her throughout the day,’ added the spokesperson.

‘The Leeds Castle staff would like to wish a big happy 30th birthday to Pickles, the feathered king of the castle.’

The old bird is often seen swimming gracefully across the castle’s ancient moat or on the across the large Great Water near the building.

He arrived at Leeds Castle in 2013 aged 22, and when he arrived there was little known about him other than he had hatched sometime in early June 1991.

So the castle’s falconry and wildlife team decided to assign him a birthday and decided June 3 would be known as ‘Pickles Day’.

A typical lifespan for whooper swans is around 10 years in the wild, but they can live into their late 20s in captivity.

They undertake one of the longest sea crossings of any swan species, migrating around 1,400km to Britain from Iceland.

There are 19 captive bred swans at Leeds Castle, including whooper swans, mute swans, trumpeter swans and the famous black swans.

A millennial founder who landed 6 figures in investments breaks down his plan to build an empire of applesauce. Yes, applesauce.