The streets of London’s Chinatown were packed this afternoon after an online message board advertised free Covid jabs without needing any documents.

A vaccine bus for walk-in appointments was available from noon until 5pm today, according to the Chinese Information and Advice Centre website (CIAC).

Members of the community were told they did not need a proof of address or NHS number and that undocumented migrants were also welcome.

CIAC advertised the information in English and Chinese in a bid to reach as many people as possible.

The message said: ‘You DO NOT need to have: NHS number any proof of address personal identification Undocumented migrants also welcomed Stay safe! Get vaccinated!’

The bus drew in hundreds of people, with two community leaders appearing to head the operation by organising the crowds into an orderly queue. 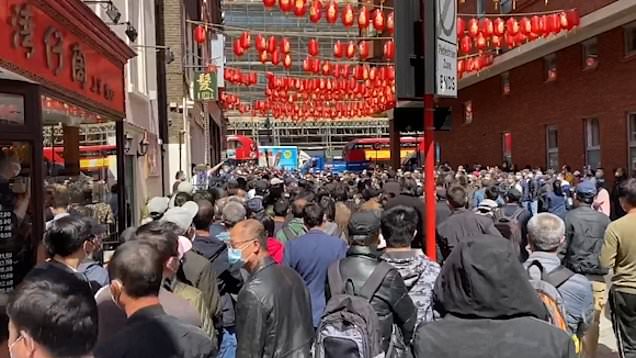 Anti-vaxxer Piers Corbyn, brother of ex-Labour leader Jeremy, later turned up at the scene to lead a protest urging people not to get the jab.

A group of women chanted ‘shame on you’ at people on board the bus, according to Mailonline.

The drive comes as the India Covid variant continues to spread across England, particularly the North West and London.

Surge testing is being rolled out in five hotspot areas in the capital: Hillingdon, Brent, Harrow, Ealing and Hounslow.

New government guidance advises people in the Borough of Hounslow to avoid travelling in and out of the area due to the rise of the B.1.617.2 strain.

The rise in cases has put so-called ‘freedom day’ on June 21st in doubt, but ministers have insisted the jab is effective against the variant, with areas of high rates being targeted with a jab roll-out.

Although Chinatown in Soho is not one of the Covid hotspots, vaccine uptake is lower among some communities facing access challenges, particularly communities experiencing homelessness, ethnically diverse communities, travelling communities and unregistered patients.

Vaccine buses have popped up around the UK with volunteer groups enlisted to help run them in areas where take-up has been low.

The bus in Chinatown is an official service, run by Westminster Council in partnership with NHS England, and goes to different locations within the area.

Its next visit is due to be the Portobello Road area tomorrow from 10am.

NHS staff are on board to deliver the vaccine, alongside council staff and volunteers who are helping to answer questions people might have about the jab.