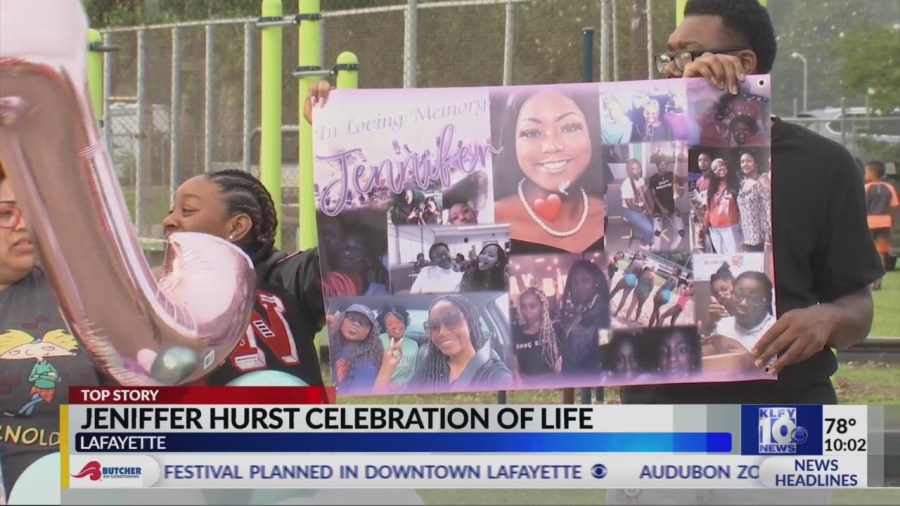 LAFAYETTE, La. (KLFY) -- Wednesday night, the friends and family of a Lafayette teen found shot and killed this month celebrate her life at Mouton Park.

Jennifer Hurst (18) was slumped over inside a vehicle near an apartment complex on McDonald Street overnight Saturday, May 15. Her boyfriend, Lucas Williams (19), turned himself over to police for her death.

The memorial was truly emotional. Tears fell down with the rain. Hurst's family was only able to say a couple of words before breaking down.

During her 18 years, Jennifer Hurst left an impression on everyone who knew her whether it was at work or at school.

"Something about Jen, she just always had that generosity," said Haylen Mallery, who graduated with her. "Like no matter when it was or no matter how much she wanted something, she would always give you her last," he remembered.

Cammie Flugence was another former classmate who helped organize the balloon release. She said, "Jen was so nice, genuine, caring, loving, and I just couldn't like that would happen to her."

Hurst was a 2020 graduate of Northside High, playing flute, piccolo, and clarinet, really anything she needed to. Wednesday, her Viking bandmates wore their school colors in support.

"Band makes you like a family, so it wasn't just like we were classmates. We spent plenty of time outside of school together," bandmate Chyrean Charles stated.

Jennifer Hurst's balloon release was also a celebration. Everyone left with a full stomach and a full heart. They also warned of domestic abuse and wished they wouldn't have to say goodbye like this.

Jennifer Hurst was buried Monday in Jeanerette where her mother grew up.

Lucas Williams is the Lafayette Parish Correctional Center with a second-degree murder charge and a $250,000 bond.

Ikpeazu calls for restructuring, devolution of power, others