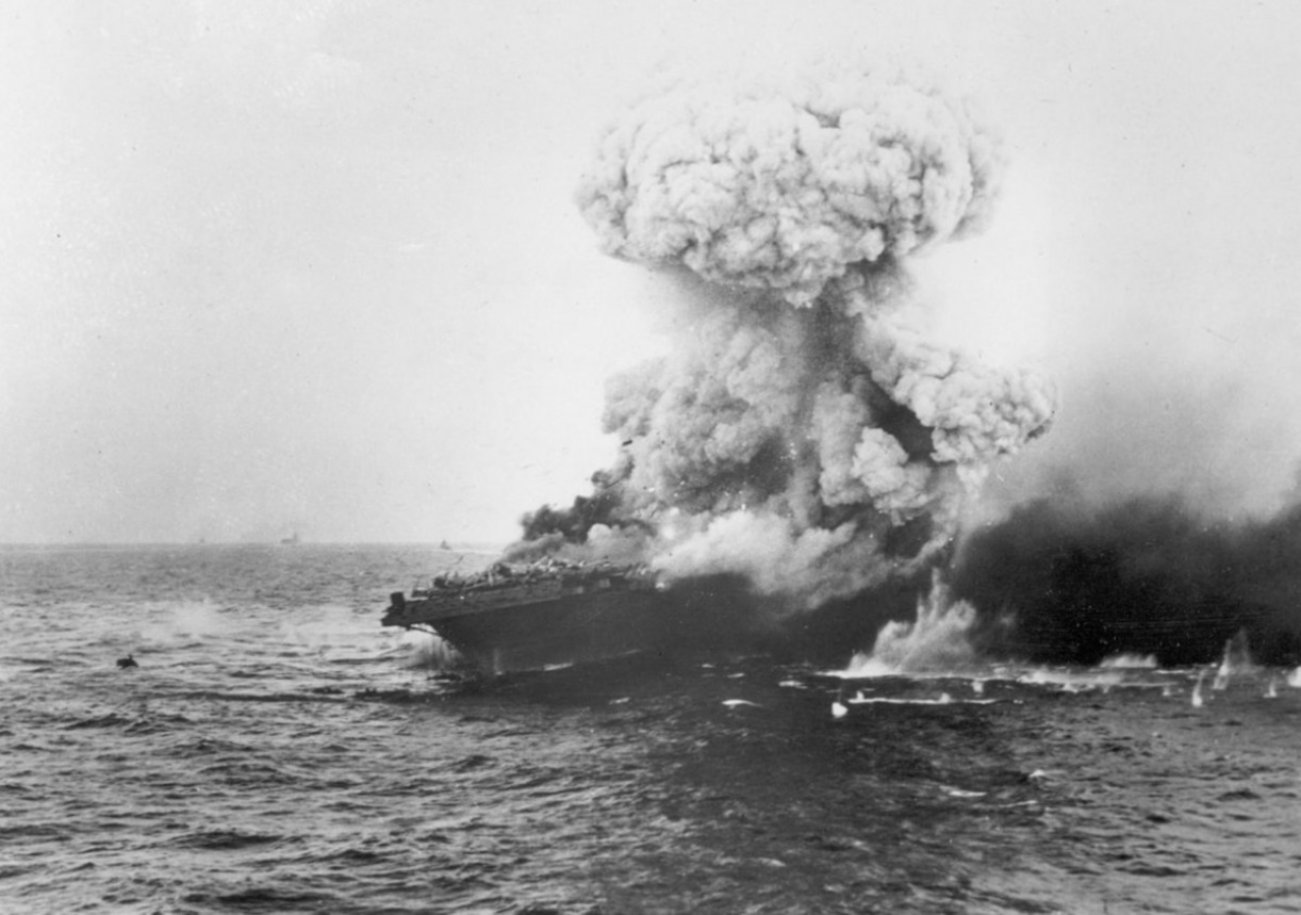 Rather than a mere prequel to Midway, Coral Sea was a milestone: it put the first brakes on the Japanese Navy’s blitzkrieg across the Pacific.

Here's What You Need to Remember: World War II carrier warfare was sink or be sunk: whoever could first spot the enemy’s carriers could sink those ships before the enemy launched its own strike.

Many history books say the turning point of the Pacific War was the Battle of Midway in June 1942.

But a month before Midway, in a patch of ocean 3,500 miles away near the coast of Australia, there occurred another battle that could also be termed the turning point of the Pacific.

The Battle of the Coral Sea (May 4–8, 1942) has always been portrayed as the prologue to Midway—a sort of Midway-lite. Like Midway, it was a battle sparked by deciphered Japanese codes. And like Midway, it was an air-sea battle without any combat between surface ships; in fact, it was the first battle fought by fleets that never came within sight of each other.

But rather than a mere prequel to Midway, Coral Sea was a milestone: it put the first brakes on the Japanese Navy’s blitzkrieg across the Pacific.

For a time, Japan seemed unstoppable. In just five months, beginning with Pearl Harbor, the Rising Sun had shattered Allied power in the Pacific. Yet by May 1942, amid the euphoria of victory, Japanese leaders had to ask themselves a fundamental question: What next?

Japan now set its sights on Australia. Attempting to conquer the Land Down Under—even with the best Australian troops in North Africa fighting Rommel—would have strained Japanese military and logistical resources. However, by seizing airfields near Australia, they could isolate that Western outpost in the South Pacific from American supplies and reinforcements.

Japanese planners focused on capturing two locations. The first was the island of Tulagi, next to Guadalcanal Island, itself destined to become a battlefield three months later. But the more strategic objective was Port Moresby, on the southeastern coast of New Guinea and ideally placed for Japanese aircraft raiding Australia.

As so often in the Pacific War, it was Allied codebreakers who jammed the first stick into the imperial spoke. Deducing that Port Moresby would be the target of an amphibious assault, they alerted U.S. Pacific commander Adm. Chester Nimitz, who wanted to dispatch all four of America’s fleet carriers to the southwestern Pacific. But the Enterprise and Hornet had been sent on the Doolittle Raid, which left just the carriers Lexington and Yorktown. Considering that the Japanese could muster six aircraft carriers for the Pearl Harbor strike, Nimitz was taking a risk.

Compared to epic naval clashes like Midway and Leyte Gulf, the meager forces both sides employed at Coral Sea made it seem more like a sideshow. The Port Moresby invasion force consisted of just five thousand men on eleven transports, escorted by seven light cruisers and destroyers. The Tulagi force consisted of just four hundred men but heavily escorted by the light carrier Shoho and four heavy cruisers, which, after Tulagi was taken, would support the Port Moresby invasion. The real Japanese strength were the fleet carriers Zuikaku and Shokaku and their 150 aircraft, which would support both landings.

The combatants would soon encounter each other in the warm waters of the Coral Sea, between Australia and New Guinea. Even for a naval battle, which are often confused affairs, Coral Sea was chaotic. The Americans knew the Japanese were coming. But poor air reconnaissance left American commanders believing the Japanese carriers were north of Guadalcanal. As for the Japanese, they believed the American carriers were still in the central Pacific.

The United States drew first blood on May 4, when the Yorktown’s aircraft struck the Tulagi invasion force, sinking a destroyer and three minesweepers. The next morning, the ubiquitous Japanese long-range flying boats spotted the Americans. Land-based B-17s from Australia tried to bomb the Japanese ships, but as usual at the time, were unsuccessful.

World War II carrier warfare was sink or be sunk: whoever could first spot the enemy’s carriers could sink those ships before the enemy launched its own strike. And so on May 7, both fleets tensely waited for the reports of the search planes. Receiving a report that the American fleet had been sighted, the Japanese launched all available aircraft. When seventy-eight planes arrived on target, they found just two warships to sink—and they turned out to be a mere destroyer and a tanker. An American search plane radioed that the Japanese carriers had been found: when the U.S. planes arrived, they found just the light carrier Shoho, which was also dispatched (leading to the famous signal from a U.S. pilot: “Scratch one flattop”). It would be far from the last case of mistaken identity in the Pacific War carrier battles.

In late afternoon, the Japanese took a desperate gamble: they launched twenty-seven carrier bombers at the U.S. fleet, even though the planes would not return until after dark (night carrier landings were risky at the time). But they hadn’t reckoned on the existence of U.S. radar, which guided F4F Wildcat fighters off the carriers to destroy eight bombers and abort the Japanese raid.

The climax came on May 8, when both sides spotted each other at a distance of about 250 miles. What ensued was simultaneous slaughter. U.S. SBD Dauntless dive bombers planted two one-thousand-pound bombs on the Shokaku, and one on the Zuikaku. The Japanese slammed the Lexington with two torpedoes and two bombs, while the Yorktown took a single bomb hit that caused massive damage.

Each sides had knocked out the other’s carriers. There was still strategic objectives to fight over, but little to fight with. Without air cover, the Japanese ordered the Port Moresby invasion force to retreat, while the battered Shokaku and Zuikaku limped home to Japan. The Yorktown also limped away, but the Lexington so badly damaged that it had to be sunk by American destroyers.

Who won? That determination is as confused as the battle itself. Tactically, the Japanese had come out ahead, by trading an eleven-thousand-ton light carrier for a forty-three-thousand-ton American fleet carrier. However, the Japanese lost ninety carrier aircraft and many of their well-trained and irreplaceable pilots. The Americans lost sixty, but from the factories, dockyards and flight schools were streaming vast quantities of planes, ships and pilots. The United States could afford the losses. Japan couldn’t.

Strategically, Port Moresby had been saved, which took some pressure off Australia. Despite grievous damage, the Yorktown limped back to Pearl Harbor. Repair crews patched the carrier up in three days, quick enough for the ship to make the all the difference in the American victory at Midway. The two damaged Japanese carriers missed that battle. Had they been at Midway, Japan would likely have won the battle.

But what mattered most was that in war, momentum is key, and Japan lost it at Coral Sea. As long as the Allies were too confused and demoralized to put up much resistance, Japan could use its limited forces like a samurai swordsman, in one continuous swirl of flashing steel.

After Coral Sea, it was Japan that was thrown off-balance.

Michael Peck is a contributing writer for the National Interest. He can be found on Twitter and Facebook. This article first appeared several years ago.