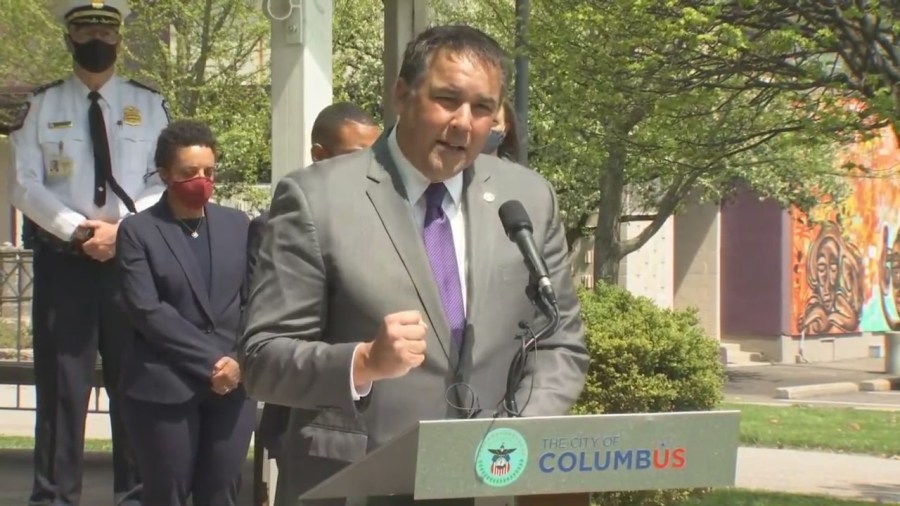 COLUMBUS (WCMH) -- Before the jury announces its verdict in the Derek Chauvin trial, Columbus leaders are urging the public to stay peaceful.

"A verdict could some soon. Tensions are high," Columbus Mayor Andrew Ginther said during a “Call for Peace” event he led in Mayme Moore Park Monday afternoon.

The trio highlighted the work done locally to address racial disparity in the city over the last year, but also said more work needed to be done.

"Regardless of the Chauvin verdict, we must continue to do the work of reform, for it is our generation's calling," Hardin said.

But as the jury deliberates in the Chauvin trial, local leaders are also bracing for the possibility that demonstrations could spark again.

"Violence and property destruction is not the solution to police reform and discrimination," Ginther said. "Raise your voices for justice, demand change and reform, but not your hands in violence."

"Please march in peace because the days ahead are going to be stormy and if we cannot find our hope and our faith again, a hand of allies among our brothers and sisters, the dreams of equity, reform, and justice will slip farther and farther away," Hardin said.

Ginther has spoken with faith leaders in the community to spread that same message of peace.

"There is a method and there is a way that is productive and fruitful and positive and that can help us move the needle towards a more equitable culture and city," said Bishop Timothy Clarke, senior pastor at the First Church of God. "It will be in the hands of 12 citizens. While we pray for justice, I want to, and all of us here want to, implore our city and our citizenry to please, even if you protest, to do it peacefully and to do it knowing all of us are fighting for justice and we are demanding justice."

The call for peace comes just a week after an incident at Columbus Police headquarters involving a demonstration.

Interim Columbus Police Chief Michael Woods said last week’s incident was a rare moment of engagement with protestors since last summer, one he hopes they don't have to repeat .

"The only time that was different was when a group chose to break into police headquarters and assault a police officer,” Woods said. "That's when things changed. Up until that point, there was no interaction with the Division of Police and our officers watched the crowd and they were peacefully protesting. When that changes is when we have to do something and we will be prepared to do something."