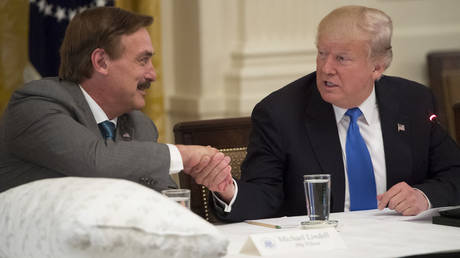 Trump superfan and pillow-peddling conservative Mike Lindell has launched a new social media platform to coincide with a $1.6 billion lawsuit he’s filing against Dominion Voting Systems, which he blames for Trump’s election loss.

Lindell launched his social media site FrankSpeech.com on Monday, the anniversary of the battles of Lexington and Concord, the first two engagements of the Revolutionary War in 1775. The website itself was represented as a strike-back against Big Tech’s domination of the internet, which has solidified in the last several months as social media booted hundreds of thousands of pro-Trump figures off their platforms. Lindell himself presented his compatriots and the site itself as a revolutionary event in which “millions” of like-minded accounts, all banned from big-time platforms (or on the verge of being banned), could fight back against the massive power of Google, Facebook, and Twitter.

As Frank Speech continued to invite individuals to sign up, however, the website was beset by glitches, and individuals attempting to sign up around 8am local time were bombarded with frustrating “500 Internal Server Error” messages and other brief derailments.

Lindell, who sells pillows extremely enthusiastically under the brand name My Pillow, and has become one of the most flamboyant corporate spokespeople for the former president, was not so easily defeated, however, having lined up a string of patriotic guests eager to celebrate the anniversary of the American Revolution, and they continued to chat with the loquacious retailer as the site worked to get back online.

“We’re going to keep going live until the site’s functionality returns and users can sign up for Frank Social,” Lindell declared fervently, confident in his ability to livestream for as much as 48 hours in his battle against the enemies of Trump “to secure the American Dream, life, liberty, and the pursuit of happiness.” The guests had much to say against the political forces currently running the US, referring to “spiritual cannibalism” and holding up Lindell and his new social media platform for praise.

Lindell had another trick up his sleeve as well, announcing on Monday that he would be suing Dominion Voting Systems (DVS), a company that makes voting software, for its alleged “suppression of speech and attacks on [Lindell’s company MyPillow].” The $1.6 billion lawsuit came in response to DVS’ own hefty lawsuit, which targeted not only MyPillow but Lindell himself, allegedly causing harm. DVS sued both Lindell and his company for $1.3 billion in February, arguing that any claims Lindell had made against the company, which he accused of committing fraud against then-president Donald Trump during the election, had been made by Lindell speaking on his own behalf rather than as CEO of MyPillow.

Lindell filed four lawsuits in total, against attackers stemming from the lawsuits he had initially filed following the election fraud suit, and has vowed to take on some of his targets in the “free market.” Frank Speech is intended to serve as a censor-free platform, though it may run afoul of plans to cut out censorship entirely, with efforts to place a ban on profanity and taking the Lord’s name in vain. Another Big Tech competitor will target Amazon.com “patriotically,” with the planned name ‘MyStore’.

Lindell was banned from Twitter in January for continually referring to what he described as election fraud during the previous two months – actions the platform had gradually cracked down on, especially after pro-Trump demonstrators descended on the Capitol earlier that month to disrupt plans to certify Democrat Joe Biden’s electoral victory.