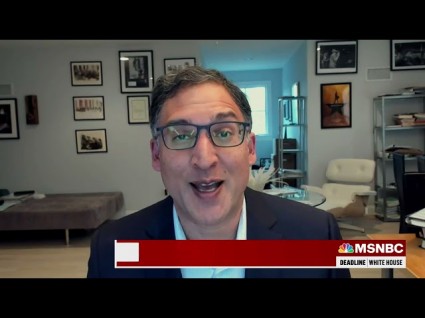 As Raw Story pointed out, things seem to be getting worse for Trump. A lawsuit filed against him Wednesday by two Capitol police officers is extremely compelling. It states that one officer was "was crushed against the doors" of the Capitol and "sprayed with chemicals" and bled from his face. The other was slammed against a stone column, injuring his head and back.

C&L’s Susie Madrak wrote that since the bar is lower in a civil case than for a criminal one, it probably won’t be hard for the two officers to persuade a jury that Trump should be held responsible for inciting the Capitol attack.

Katyal seems to agree. He's not only unsurprised by the lawsuit but has been waiting for it. Trump’s ridiculous claim last week that there had been “zero violence” on January 6th and that the insurrectionists had been “hugging and kissing the police and the guards" is not going to help him. Sen. Mitch McConnell “literally invited this lawsuit on the floor of Congress, so it’s hard to say, as the Trump defenders will, whoever is left defending him, that this is a political lawsuit,” Katyal opined.