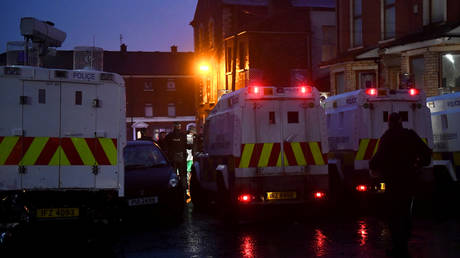 Violence has erupted in Belfast, Northern Ireland, after a loyalist rally on Friday evening, as a crowd of youths attacked riot police with stones and fireworks before officers blocked off streets with their vans.

Around two hundred people gathered for the rally at Shaftsbury Square in the southern part of the city, according to estimates by local outlet the Belfast Telegraph. The loyalist event had been organised via social media, according to reports, and wasn't arranged by any one group.

After a crowd amassed, the demonstrators started tossing stones, bottles and firecrackers at the police. At least one firebomb was also reportedly deployed.

Police used their riot vans to form a barricade and push the crowd into the adjacent streets.

There have so far been no reports of injuries as a result of the clashes or any arrests being made.