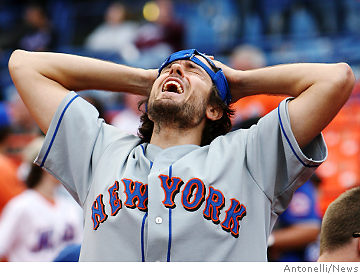 Unfortunately, the Nationals are dealing with COVID-19 issues and New York’s season opener has been postponed to Saturday at the earliest. We will sadly have to wait to see Francisco Lindor‘s $341 million dollar smile in a Mets regular season game.

According to Anthony DiComo of MLB.com, says the Nationals had two additional players test positive for COVID-19 today. They also had a fourth player placed into quarantine who is “likely positive.” The Mets’ first game of the season is still up in the after after being postponed to to coronavirus issues yesterday afternoon. DiComo reports that the teams are “not sure” if the Mets and Nationals will still be able to play this weekend, as the Nats are still working on “extensive contract tracing.” New York may have to wait to open their season until Monday in Philadelphia.

The Twins’ Josh Donaldson was removed from tonight’s game against the Brewers after a double in the first inning where he appeared to limp a bit while rounding first base, per Alex Fast of Pitcher List.

According to JJ Cooper of Baseball America, the roster limits for all full season minor league teams will be significantly expanded in 2021.

Red Sox manager Alex Cora showed off his Lindor 1’s in a presser today. He was celebrating the extension of his fellow native of Caguas, Puerto Rico, Francisco Lindor, per Rob Bradford of WEEI.

According to Alden Gonzalez of ESPN, on the eve of opening day, President Joe Biden pushed for players to get vaccinated, and said that the Rangers are making a “mistake” by starting at full capacity, and that he would “strongly support” the All-Star game being moved out of Atlanta.

MMO’s staff all chimed in on the excitement surrounding the Francisco Lindor extension.

On today’s episode of Locked On Mets, host Ryan Finkelstein discusses Francisco Lindor’s contract extension press conference and the impact this deal has on the franchise moving forward.

Ryan also finishes off his preseason NL East Power Rankings, ranking the bullpens, benches and backstops in the division.

1984: Legendary Met Davey Johnson made his major league manager debut. The Mets fell 8-1 to the Reds in Cincinnati and snapped a 14-year Opening Day win streak.

This loss was not career defining for Davey, as Mets fans will know. The club won the next sixth straight, with the pitching staff giving up only seven runs during that stretch. New York moved from dead last in the NL East in 1983 to first place at the All-Star break in 1984 — finishing the year second in the division. The 1984 Mets won 90 games, at the time, setting a record for the second most in club history. This was the beginning of a strong future with Johnson at the helm.

The post Morning Briefing: Mets “Not Sure” When Season Will Open first appeared on Metsmerized Online.

Report: Paul vs Askren had over 5 million Google searches