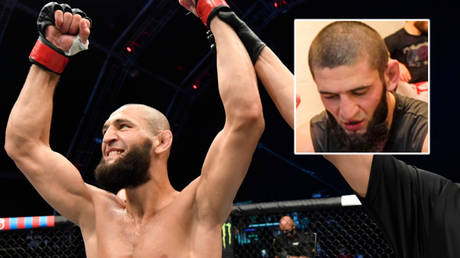 Khamzat Chimaev's Covid-19 infection which led to the cancellation of his March fight with Leon Edwards was so severe that he "couldn't speak" and "thought he was going to die", according to his manager.

After exploding onto the scene on "Fight Island" last summer with two wins in the span of just ten days - and in two different weight classes, no less - as well a one-punch knockout win against Gerald Meerschaert less than two months later, it has proved more difficult than previously envisaged to hand surging welterweight contender Chimaev his next Octagon assignment.

The undefeated Chechen-born Swede Chimaev had been expected to square off with fellow 170lbs stud Edwards in December. But that fight fell off the UFC schedule after both men contracted Covid-19, prompting the UFC to kick the can down the road and reschedule the fight for March when - presumably, at least - both fighters would have recovered from their illnesses.

Not so. It was confirmed this week that Chimaev was once again out of the fight, prompting the UFC to bite the bullet and seek a new opponent for England's Edwards, the fighter in the midst of an eight-fight win streak in the shark tank UFC welterweight division.

And the reason for this, according to Chimaev's team, is the aftershocks of his Covid-19 diagnosis - some of which are still being felt a full two months later.

"It is what it is and there’s nothing we can do. We tried to come back this Tuesday. He insisted that he wanted to train. Then we tried and it failed," said Chimaev's manager Majdi Shammas in a video released by Frontkick.

"He was really bad, you know? He didn’t even do two rounds straight. He did one round and then rested. He started coughing, he started feeling ill again, and we had to cancel the training. He even went to the ambulance, to the hospital."

Shammas explained further, saying that the virus took such a toll on Chimaev's conditioning that he was at times unable to speak - and, on occasions, was too tired to return to his hotel room, instead falling asleep in the lobby.

"He complained that he had some chest pains after the training, so we gonna check the heart as well,” Shammas added. "We have been in and out of hospitals so many times now.

The video in which Shammas makes these comments shows a weary Chimaev in that hotel lobby and also shows the fighter asking the camera crew not to film him.

As Shammas explains, the concerns about their fighter were very real - even to the point that the fighter confided to his coach that he was fearful he might lose his life.

"He can’t train," Shammas said. "His friends called me, ‘Hey, Khamzat can’t even speak.’ His fever is so high, his headache is so much, muscle pain and everything.

"Then an ambulance came and got him to the hospital. Even when he was in the hospital, he called me. When he called me he thought he was going to die. It was really bad.

Turkish olive farmer battles to save her land from coal mine

Boy, 13, among 10 children reported missing in London in the past month

FIVB 4-star Doha: What every American team needs to improve their Olympic standings