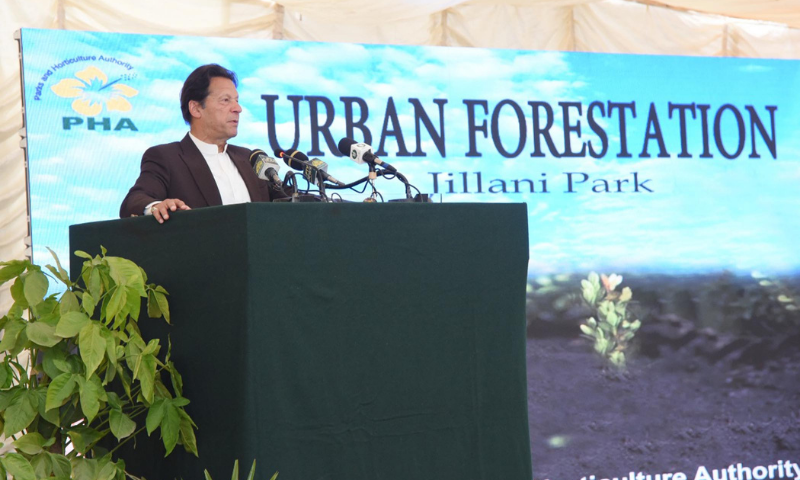 LAHORE: Prime Minister Imran Khan has said that governments in parliamentary democracy do not think beyond their tenure of five years for their vested interests though the future of countries depends on long-term planning.

He called upon the nation to join the 10 billion trees planting campaign to help reverse the smog, a silent killer, and environmental pollution.

PM Khan expressed these views while launching the Spring Plantation 2021 campaign covering 51 Miyawaki urban forests sites in Lahore, beginning with an urban forest in Jilani Park. The campaign is being run under the slogan of “Plant before it’s too late”.

He asked the Punjab government to show to the masses the fast growth of Miyawaki forests besides asking the Khyber Pakhtunkhwa government to publicise the one billion trees planted in recent years.

Regretting that Lahore’s forest cover had reduced by 70 per cent during the past 13 years, Mr Khan said Lahore’s fog had eventually been replaced by smog that could reduce human beings lives by six to 11 years. “Smog is a silent killer that severely affects lungs and brains of elderly people and children, but successive governments just ignored it,” he added.

He said Lahore expanded in all directions that led to deforestation and asserted that his government would reverse the smog and environmental pollution. “There is nothing that cannot be changed but we need to struggle hard,” he said and cited China’s example that made fast economic development and was planting trees and declaring green cities.

Mr Khan said he was also looking forward to bringing about a “silent revolution” by launching a campaign for massive olive tree plantation to overcome edible oil shortage in Pakistan and cut its import bill.

He said he had received technical advice that the olive trees could be planted on the right side of the Indus and added that he would inaugurate the olive trees project next week.

He said the Mother Nature had blessed Pakistan with 12 climatic zones from K2 peaks to sea level and anything could be planted to get all dividends and committed that this government would give an environmentally better Pakistan to the next generations. He said thick forests of Chhanga Manga, Kundian in Mianwali as well as those in Deepalpur and Chichawatni had been callously cut without assessing the environmental pollution onslaught.

He called for actively pursuing the 10 billion tree planting campaign during the spring season and said the respective governments should involve students of schools, colleges and varsities in these activities. “Students’ involvement is necessary because it is a campaign to secure their future,” the PM said.

He also asked the respective governments to involve businessmen in the project, because they would be ready to give donations. They were usually reluctant to pay due taxes on their incomes to the government, he remarked.

Earlier, the prime minister chaired meetings to review the Universal Health Insurance Programme and establishment of more fruit and vegetable markets in cities and measures to bring down prices of flour. He was briefed on the progress in the delivery of health insurance cards after the Punjab cabinet also gave its nod to expand the free healthcare services through the insurance policy to every family across the province.

By June 30, health cards would be delivered to all families in seven districts, while Punjab’s entire population would get the free health care facility by the end of 2021, PM Khan was informed.

He assured the Punjab government that the federal government would continue supporting this revolutionary programme.

At the other meeting, which was held to review fruit and vegetable markets’ expansion, the prime minister directed the deputy commissioners and assistant commissioners to ensure stability in the prices of daily commodities to provide some relief to the masses.