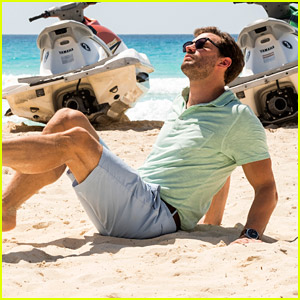 Jamie Dornan has a big musical moment in the new movie Barb and Star Go to Vista Del Mar and fans might be wondering if that’s actually him doing the singing and dancing on screen.

The movie’s director Josh Greenbaum opened up to Slate about working with Jamie and how much of that scene needed a double.

“It’s almost all him other than when we make it obvious that it’s not. All the singing is him. He’s got a pretty incredible voice, which I think, when we wrote it and cast it, I didn’t even know. I figured, ‘Oh, we’ll probably have someone else sing.’ I didn’t know he had a wonderful voice,” Josh said. “But we started talking more and more, and he was in a band in high school, and it was like, ‘Oh, he can really pull this off.’”

Josh added, “And then the dancing, obviously he’s fully committed. There are a couple of sequences, like when he’s spinning like a baby ballerina and digging himself into the sand, that are obviously doubled. Again, I hope it comes across as clear that part of the joke is it’s clearly not him, but if so, I’m sorry for ruining it for people that’s not him. He’s clearly doing the bulk of the funny tumbling and jumping. But when there’s beautiful, full-split ballet moves, I hate to tell the world, but that’s actually not Jamie.”

Josh also opened up about the moment in the musical number when Jamie rips his shirt off. He was asked if they used a special shirt that would rip easily or if Jamie is really strong enough to actually do that.

“Again, I want to tell you he’s just that strong. The actual behind-the-scenes story is I think he did do a take or two where we didn’t rip it. Because I was like, ‘Look, it might be funny if you’re struggling to rip it,’ because I think we’ve all seen the tear-off. In our movie, maybe because he’s having such a hard time, even his shirt won’t rip off properly. Nothing’s going his way. So I think he actually did do a take or two where he just ripped it himself, and that is actually I believe what’s in the movie,” Josh said.

He added, “But we did other takes where you pre-score [the shirt], and you just put a little rip at the bottom or the top, and it helps out a little bit. Look, he’s a very strong man, if you didn’t know that and can’t tell from his body. I have full faith that if he ever had to rip his shirt off without any help, he can do it.”

Jamie was asked about his sexuality in a new interview.

MLB will delay Triple-A season by a month