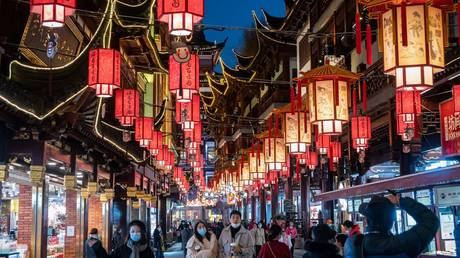 China continued to attract more foreign capital in the first month of this year, after a record 2020, when it overtook the US as a major destination for foreign direct investment (FDI).

Foreign capital inflows into the Chinese mainland reached 91.61 billion yuan ($14 billion) in January, marking a 4.6 percent increase year on year, according to the data released earlier this week by the Ministry of Commerce. In US dollar terms, FDI jumped by 6.2 percent compared to a year earlier, reaching $13.47 billion, the ministry said in a statement.

Tertiary industry gained most of the fresh cash inflows, amounting to nearly 75 percent of FDI. And the coronavirus pandemic has not stopped China from attracting record-high levels of foreign capital in 2020. FDI in US dollar terms, excluding financial and insurance sectors, rose to $144.37 billion last year –  the highest level since records began in 1983.

Global investors have been boosting investment into China for several consecutive years in a row. While the pandemic wreaked havoc in global markets and crushed global FDI flow by around 40 percent, China became one of the few exemptions from the trend, according to a recent report by the UN trade agency. The increased foreign inflows allowed it to outpace the US as the top destination for new foreign direct investment.

Thanks to rapid recovery from the coronavirus crisis, China – which was the first country to face the outbreak of the deadly virus – became the only major economy to avoid contraction in 2020. The pandemic might have accelerated a major shift in the global economy, as China is now projected to overtake the US as the world’s largest economy sooner than initially expected, by 2028, according to the UK-based Centre for Economics and Business Research.