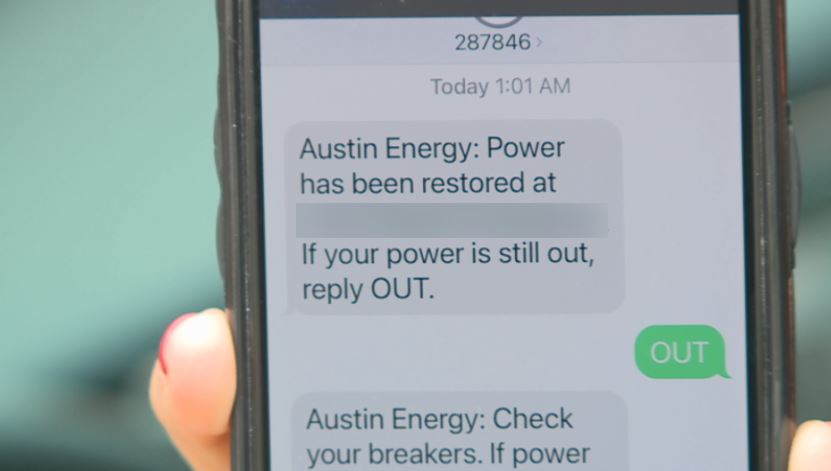 AUSTIN (KXAN) — Joe Street and his neighbors gathered at the end of their cul-de-sac Friday afternoon after spending the majority of their day in their cars, trying to get warm.

They said they've been without power for hours — some of them haven't been able to flip on the lights or heat since Thursday afternoon.

His neighbor, Saundra Roark, said when she opened the Austin Energy Outage Map for details, the map didn't register their street as being part of any outage. So, they began reporting it to the power company.

A few neighborhoods away, a woman named Beth sat in her car, sending a flurry of back and forth texts to Austin Energy.

"Power has been restored," one text from the company read. This came in last night around 1 a.m. after she had reported the outage. By Friday afternoon, nothing had changed, but several texts seemed to indicate it had.

Wintry Weather Checklist: What to do before and during to help prevent issues at your home

"I've never seen a power outage last this long, and I've never been told by the company the power is on when it's not — so it's concerning," she said. "There clearly is a problem that they're not acknowledging."

"We had 16 different times where we were informed our power was restored, and it's back on, but there is not a time when that happened," said Thomas Daniel.

Daniel lives in the Great Hills neighborhood. His family lost power around 1:30 p.m. Thursday afternoon. It was restored at 3:42 p.m. Friday afternoon, before it went out again just a few hours later for him and his neighbors. They called 311, the City of Austin as well as Austin Energy, but had no luck in getting the issue resolved Friday evening.

Austin Energy told KXAN it was reviewing issues with the map and with customer notifications. Its crews were seeing so many overlapping outages that all of them may not be reflected on the map, a spokesperson explained.

"These issues may stem from an instance where one small outage area is part of a larger outage area. As each segment is repaired, those customers are restored, and the system may register that restoration as complete when there are still smaller outages that need to be addressed," the spokesperson said.

They're asking their customers to continue to be patient, as they continue to send crews out to each affected area.

"Each outage is a complex event. The crews on the scene must locate and assess the cause of the outage and communicate with other crews and the control center, often during changing conditions such as darkness, wind, rain, flooding," the spokesperson said.

According to Austin Energy, more than 200 different outages affected more than 11,000 people as of Friday afternoon. By that evening, the company reported that number had dropped to 7,000 customers.