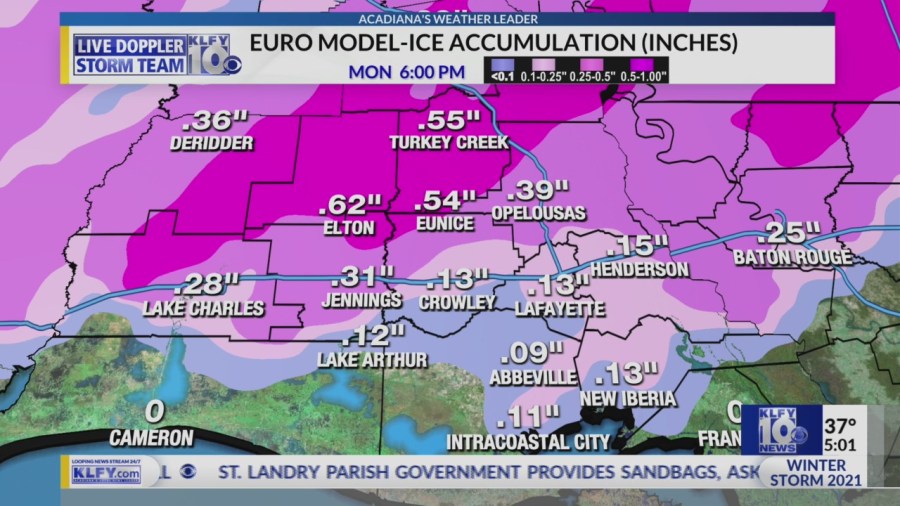 Expect a cold night with lows in the low to mid 30s with just a few showers possible.

Expect a similar day for tomorrow with cold temperatures, mostly cloudy skies, and isolated showers. Temperatures getting into the lower 40s for highs tomorrow afternoon.

By Sunday morning, temperatures may finally get closer to the freezing mark in Acadiana. An upper-level disturbance will be working into the area, increasing precipitation. Some of this precipitation could be in the form of sleet, especially across the northern portions of Acadiana. No significant problems anticipated Sunday morning, but some bridges and overpasses could get slick if the precipitation comes in heavier than predicted.

Temperatures will get above freezing during the day Sunday, but drop right back to near the freezing mark Sunday night and Monday morning. Meanwhile, our strongest upper-level impulse will move into the area, developing a surface wave across the Gulf of Mexico. As the coldest air begins to arrive Monday, precipitation will be moving overhead. During this precipitation window, models show temperatures in the 31-34 degree range across Acadiana. This is right near the 32-degree freezing mark, meaning a temperature fluctuation of 2-3 degrees will make a huge difference. The European model is warmer than the GFS, as an example, which is the reason it shows ice accumulation mostly north of Acadiana, only brushing our northern parishes. The GFS model, which is colder, shows the ice accumulation getting further south closer to I-10. It's still too early to know, which model will prove correct.

On the chart below you can see ice accumulations of 0.20"-0.50," can create significant travel impacts. When you start to get ice accumulation closer to a half-inch, power outages start to become more prevalent, as tree and powerline damage increases. Although the forecast is still uncertain 72 hours out, I remain skeptical we see ice accumulation great enough to cause crippling issues. It's more likely we'll see enough to see a coating and some icy roads, especially bridges and overpasses. Parts of the coast, however, may be too warm and will only see a cold, nasty rain.

Beyond the precipitation, very cold temperatures are expected Tuesday morning. GFS model still trying to show lower teens, although I believe the GFS is too cold. The European model is showing mid-20s, which I believe to be too warm. This is a very shallow airmass, which sometimes global models, such as the GFS and European, can struggle with. I'll go with an overnight low somewhere in the upper teens for Tuesday morning. When you start to get below 25 degrees you have to start worrying about pipe protection. We'll most likely be below 25 degrees Tuesday morning, so you may want to start thinking about your preparations now.

The good news is we'll get above freezing Tuesday afternoon, meaning any ice on roadways should begin to melt!