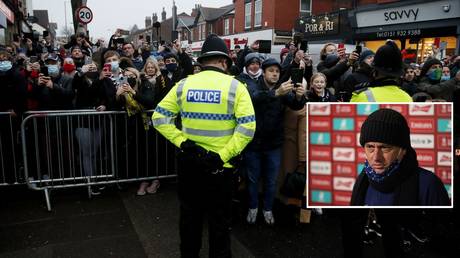 Boxer and former pro footballer Curtis Woodhouse was among those to hit out at perceived double-standards as fans of English minnows Marine massed to witness the arrival of Jose Mourinho's Spurs ahead of an FA Cup tie.

The United Kingdom remains under strict lockdown as cases of Covid-19 soar past the 50,000 per day mark, a trend which has led to health experts recommending the closure of many non-essential businesses.

Elite sport is among the exemptions of what some see as overly-Draconian regulations, though fans remain barred from attending most sporting events under the current recommendations - but Woodhouse, 40, suggests that there are in-built blind spots in the rules which unfairly impact some sectors while giving free-reign to others.

One such example, Woodhouse says, was Sunday's FA Cup tie between Tottenham and lowly Marine, a team in the eighth tier of the English football pyramid.

The game was billed as a glamour tie for the cash-stripped part-timers, a side who would rarely - if ever - compete against a team of Spurs' reputation.

And with fans barred from attending, many of them did what they saw as the next best thing and assembled outside the ground to welcome (or boo, depending on your perspective) the arrival of Mourinho's superstars - something which Woodhouse fiercely objected to.

Can’t open my gym but the streets are packed with fans. Embarrassing https://t.co/AWJUNBBI4I

"Can’t open my gym but the streets are packed with fans. Embarrassing," he wrote online, while also expressing his doubt at a news report stating that the "majority" of fans had adhered to social distancing regulations.

Whether they be for fitness enthusiasts or professional athletes, gyms have been among the sectors hardest hit by the coronavirus pandemic. Despite initially showing that there was, generally speaking at least, a very low risk of virus transmission inside them, they have once again been shuttered by the UK government as it continues to grapple with the fallout of Covid-19.

Furthermore, gyms have been identified by mental health expert as being a crucial resource for many people and suggest that they should be granted an exemption from the rules.

Regardless of Woodhouse's protestations, it seems as though any concerns about boarding up the UK's gyms has fallen on deaf ears.

Woodhouse's service to both football and boxing, as well as to his community, was recognized by the British monarchy at the end of 2019 as he was awarded the British Empire Medal (BEM).

How to Bond With Your Kids, According to Neuroscience