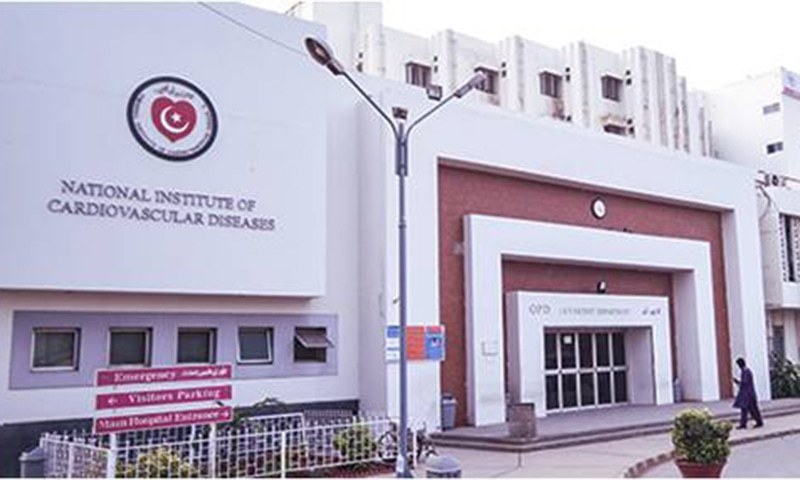 KARACHI: A key member of the National Institute of Cardiovascular Diseases (NICVD) was on Tuesday removed from his assignment just a day after he announced suspension of all surgeries at the health facility and its satellite centres in Tando Mohammad Khan and Sukkur due to prevalence of Covid-19 in many staff members, sources and officials said.

“It is notified for information that Dr Asad Bilal Awan, Associate Professor of Cardiac Surgery, has been given additional charge as Acting Head of Cardiac Surgery Department with immediate effect,” said a hospital order signed by NICVD executive director Prof Nadeem Qamar without mentioning anything about Dr Pervez Chaudhry, former head of surgery at the institute.

Dr Chaudhry had announced on Monday cancellation of all the surgeries at the NICVD-Karachi and its satellite centres in Tando Mohammad Khan and Sukkur for a week after some surgeons, nurses and paramedics tested positive for the infectious disease.

The fresh orders from the NICVD’s executive director, however, did not mention the status of its surgery department. Dawn tried to seek the version from the institute’s spokesman but he did not respond to many phone calls.

Some 15 doctors, surgeons and other staff have tested positive for coronavirus

When contacted, Dr Chaudhry sounded furious over the decision but did not elaborate any reason behind his removal as the head of the surgical department of one of the country’s major cardiac treatment centres.

He only “regretted” that he was requested to return from the United States to serve the country and now it’s a “kind” of humiliation to replace him with his “student” despite following the defined rules and health practices.

“If they reopened the department of surgery, they would risk public health for personal agenda,” Dr Chaudhry told Dawn.

Sources privy to the situation said that some 15 staff members of the NICVD including doctors, surgeons and other staff, had tested positive for the infectious disease, compelling them to postpone all surgeries and elective procedures leaving only emergency services operational at the cardiac-care facility.

With more than 100 highly qualified surgeons, doctors and trainees, providing superior cardiac treatment to approximately 400,000 OPD patients, 37,000 inpatients and nearly 200,000 emergency cases every year, the NICVD has emerged as one of the success stories claimed by the Pakistan People’s Party government in Sindh. The institute was also praised for its free-of-cost services to every segment of society.

It had transpired during the inquiry that the executive director of the NICVD was in “possession of information/evidence whatsoever, which relates to the commission of the offence(s)”.

The NAB probe is still under way and only last month the bureau’s team had raided the NICVD, checked its financial records, questioned officials of the health facility, gathered relevant documents and returned after more than five hours raising doubts over financial affairs of the largest specialised public-sector hospital and inviting strong reaction from the ruling PPP on the anti-graft body’s action.

Wednesday’s horse racing tips: Check out this 25-1 longshot at Hereford, plus big-money each way chances

Here's how Swamy Kotagiri, incoming CEO of the US's largest auto parts manufacturer, is using an 'open for business mindset' to lead the company