Demon’s Souls, released last Thursday for the PlayStation 5, is a monumental achievement for developer Bluepoint Games. While the From Software original on PlayStation 3 was already considered one of the best games of all time, Bluepoint’s acted like a tumbler, sanding away the 2009 cult classic’s rough edges and leaving behind a beautiful, next-generation gem.

My impressions of the Demon’s Souls remake haven’t changed much from last week. It’s basically the Demon’s Souls you remember from the PlayStation 3, with an added emphasis on graphical fidelity and quality-of-life improvements. Demon’s Souls on PlayStation 5 is one of the most impressive games to come out of a console launch in recent memory, both for the way Bluepoint respected the foundational gameplay that has since spawned an entire genre of Souls-likes and how the studio has managed to spruce up the original’s iconic aesthetics with only a few notable missteps.

The story’s the same as before. Demon’s Souls is set in Boletaria, a medieval kingdom where a foolish king, seeking prosperity, made an ill-fated pact with a long-slumbering demon. An impenetrable fog soon cut off Boletaria from the outside world, and a glut of demons drove its inhabitants insane. Despite the attempts of many would-be heroes to free the kingdom from the malignant fog, Boletaria is now a crumbling shade of its former self. It’s during this time of chaos that the player character, known simply as the Slayer of Demons, finds themselves trapped in the Nexus, a world between life and death, until they consume enough powerful souls to lull the source of both the fog and the demons back to sleep.

Demon’s Souls on PlayStation 3 started the Souls-series tradition of hard-to-wrangle character creators that tended to produce lifeless, sometimes even terrifying-looking heroes. Demon’s Souls on PlayStation 5, on the other hand, lets you hand-craft your character all the way down to their teeth, and makes it much easier to end up with normal-looking humans. If you’d rather just get into the action, the game also provides several presets, ranging from normal humans to more orc- and elf-like characters that could never have been generated in the original. They’re a great way to find inspiration for your own creations.

But once you get into Demon’s Souls proper, you aren’t going to spend much time looking at your character. Instead you’ll be noticing Bluepoint’s gargantuan — and largely successful — attempt to transform the world of Boletaria from a loose collection of ugly, grey levels into a group of believably homogeneous yet distinct regions. Even in its heyday, the PlayStation 3 original relied heavily on its dense atmosphere to make up for its middling technical chops. On PlayStation 5, it doesn’t have to make those concessions.

That’s not to say the Demon’s Souls remake isn’t as moody and despondent as its predecessor — its gloom runs deep. But the first time I saw lightning briefly illuminate the Tower of Latria’s tentacle-faced, Lovecraftian prison guards and errant spikes from Storm Beasts shatter like glass on dingy mountain cliffs were near-religious experiences. Boletaria, apocalyptic though it is, feels more like a living, breathing world than ever before. There’s a vibrancy to the PlayStation 5 remake that feels quite unlike anything developers were ever able to achieve on the previous console. All those beautiful, pre-release screenshots and trailers weren’t bullshit cooked up by a marketing department but genuine examples of this new Demon’s Souls’ impressive, all-encompassing facelift.

As I noted in my early impressions, I played Demon’s Souls on PlayStation 3 for the first time a couple months ago to prepare myself for the PlayStation 5 remake. But I’m not too blinded by my love for this new game to appreciate aspects of the remake that have rubbed hardcore fans the wrong way. I think the new facial animations are incredible, but bereft of From Software’s distinctive art style, the remake’s NPCs do appear as if they were lifted from more generic fantasy settings. 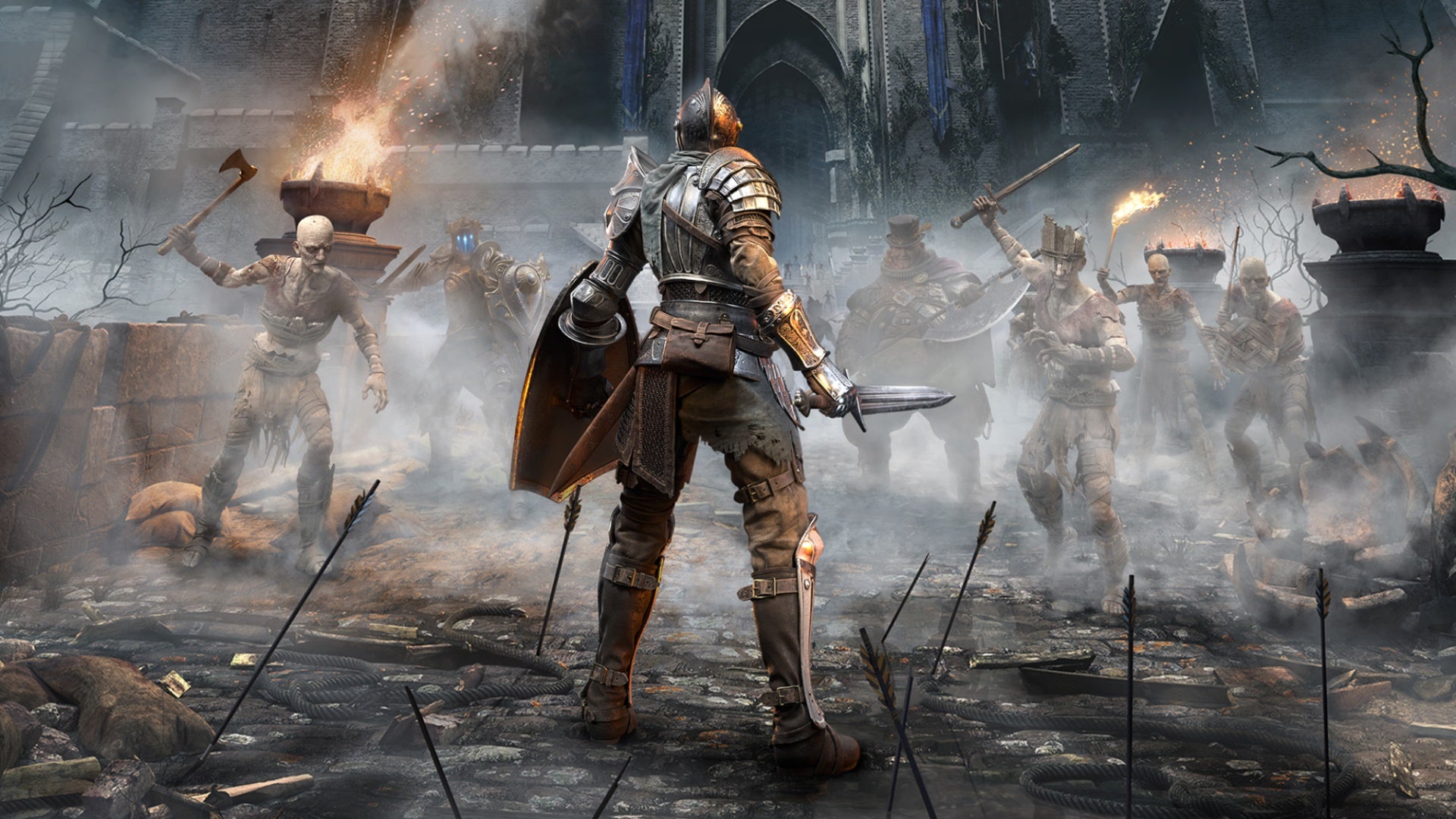 BACK OF THE BOX QUOTE

20 hours, completing the game and defeating every boss.

And while I love that the unfortunately named Fat Officials are now walking examples of aristocratic excess, bulbous and disgusting from gorging on the spoils of a world gone to hell, their updated look is far less subtle than on PlayStation 3. Where you land on these changes is obviously going to depend on your relationship with the original. I feel the overall presentation is much stronger in this Demon’s Souls remake, but there’s no arguing that some of its fuzzy charm has been lost under the PlayStation 5’s clarifying lens.

Fortunately for both parties, the classic Demon’s Souls gameplay remains largely intact. Combat is still cumbersome and crunchy, with a heavy reliance on spacing. Stages are still humongous and bereft of the frequent, anxiety-reducing checkpoints of the Dark Souls series. This makes some levels a gauntlet, but never feels overly frustrating. As with other Souls-likes, Demon’s Souls is all about careful and gradual improvement. Sure, the Maneaters might seem impossible at first, but finally putting them down is even more satisfying for the challenge.

And every encounter is improved thanks to the new DualSense controller. I’ve never felt as insignificant in a video game than while fighting Tower Knight and Storm King, two enormous demons whose violent assaults are conveyed through equally intense and varied DualSense feedback. The fights themselves might not be the most difficult, but it’s an entirely different — and sometimes jarring — experience to be immersed not only by the visual and audio components of a game but its haptics as well.

Obvious improvements to graphics and immersion aside, the PlayStation 5 remake is probably the best way to play Demon’s Souls thanks to a bevy of quality-of-life changes. None are significant enough on their own to be game-changing, but added together, they help resolve a lot of the original’s more frustrating aspects. The benefits of 60 frames-per-second gameplay are obvious, but Demon’s Souls on PlayStation 5 also includes niceties like fast ladder climbing, the ability to consume multiple souls at once, improved drop rates for rare crafting materials, omnidirectional rolling, unique weapon animations, and the transferring of items from inventory to storage anywhere in the world. The only thing I feel is missing is a way to respec your character (reset and reassign their stats). As a whole, all of these new features make for a package that feels much better to play than the original. The biggest question surrounding any remake concerns the necessity of its existence. Was it necessary to take a game as beloved as Demon’s Souls and let a group of developers who had nothing to do with the original put their spin on it? The answer to that will vary from person to person. But after playing long enough to defeat every boss and finally lull the Old One back to sleep, I have to say that yes, the remake justifies its existence. Not only did Bluepoint Games transform Demon’s Souls from an ok-looking PlayStation 3 game into one of the most gorgeous games of all time, it did so in a way that respects and even improves upon the foundation laid by From Software.

Demon’s Souls on PlayStation 5 is very much the Demon’s Souls you remember from PlayStation 3. It doesn’t miss a beat, nailing the same melancholy atmosphere and compelling gameplay that would eventually spawn fellow instant-classics like Dark Souls, Bloodborne, and Sekiro. While there were bound to be a few aspects that could have been more faithful to the original, PlayStation 5’s Demon’s Souls remake stands out as an incredibly fun way to revisit the cursed land of Boletaria. It’s creepy. It’s gloomy. You’ll get invaded by laggy arseholes near the end of a long level and have to do the whole thing over again. It feels like coming home.

Waiting for passengers, American puts Boeing Max in the air