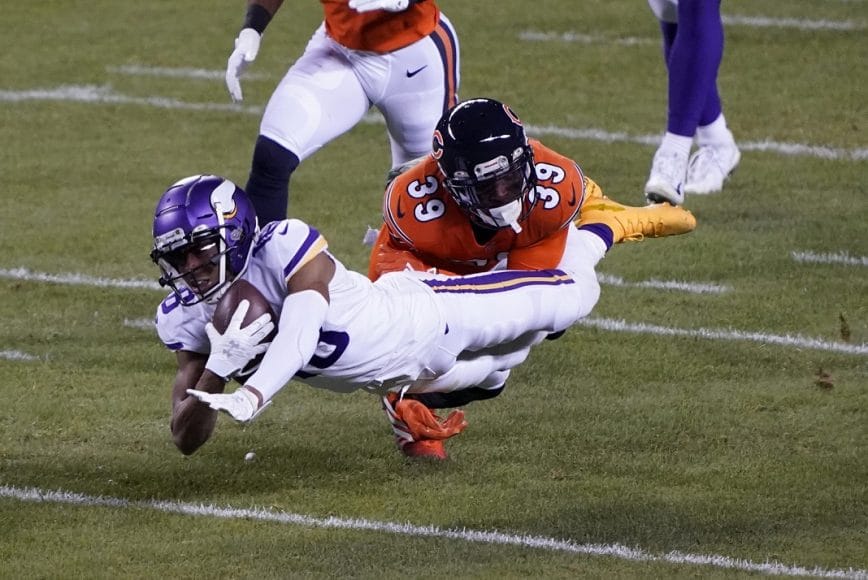 Going from 5-1 to 5-5 has to be a brutal feeling. It’s bad enough for Chicago Bears fans who have watched it unfold. One can only imagine what it is like for the players experiencing it on the field. Especially the guys on defense. Here’s a group that has ranked in the top 10 for the past three years and yet they’ve been subjected to .500 football for most of that time because the offense is a laughing stock. It can be so draining. Eddie Jackson, for one, is tired of it.

The star Bears safety wasn’t having any of the mood after a dispiriting 19-13 loss to the Minnesota Vikings. Reports came out that the 26-year old confronted the team in the locker room after the game. He preached accountability. There is no excuse for guys hanging their heads. In tough times it falls on everybody to pick each other up. That is what teams have to do.

Eddie Jackson addressed the Bears inside their locker room postgame. He encouraged players to hold each other accountable.

Said Jackson later: "You see guys come off the field with their heads down; nobody says nothing to them. That has to change. … We're a team."

“I mean, it’s tough. But we go out there every week knowing we’re going to accept this challenge to put this thing on our back." – #Bears S Eddie Jackson challenge of not having the ability on defense to fix the weakness of the offense.

"Like we don’t care what the offense do; we don’t care if they put no points on the board. All we know is if the opposing team don’t score, they don’t win. So for us, we want to continue to accept that challenge, week in, week out."

Jackson’s frustrations with the Bears offense are obvious.

That is the least surprising thing in the world. This defense held MVP contender Dalvin Cook to a season-low 3.2 yards per carry. They held Minnesota to 19 points after they’d averaged over 28 over the previous six games. They forced two big takeaways. What did the offense manage to do with that? Score six points and produced 149 yards total. One can only imagine the rage boiling in the guts of those defensive guys. Jackson included.

Yet they can’t call those guys out publicly. That would only lead to divisions in the locker room. Something they can’t afford. The only thing left to do is play harder.

Eddie Jackson echoes the feelings of Bears from defenses past

It’s pretty eerie how similar the safety sounds in his words compared to other defensive players from years past. Brian Urlacher once explained how his teammates complained constantly about the offense struggling back in the 2000s. Eventually, he told them he didn’t want to hear it anymore. The offense was irrelevant. It shouldn’t distract them from doing their own jobs which was stopping the opponent from scoring. Excuses don’t help anybody.

That is the state of mind Eddie Jackson has reached. If this offense isn’t going to help, then it’s on the defense to do it themselves. They have the talent to be great. They get paid the big bucks. If they have to win these games 13-10 or 16-13? So be it. Whatever it takes. There is no time to wallow in self-pity. That doesn’t help anybody. This team is on the cusp of their ninth season in a decade without making the playoffs.

For Jackson, who made his name at Alabama? That is unacceptable.

He is used to winning. So what he’s experiencing right now doesn’t compute with his mindset and the guy isn’t about to let that mentality permeate the locker room. This is what good leaders have to do. In times of crisis, they step up and let everybody know they need to pick it up. Whether his words have any effect will be determined in the next two weeks.