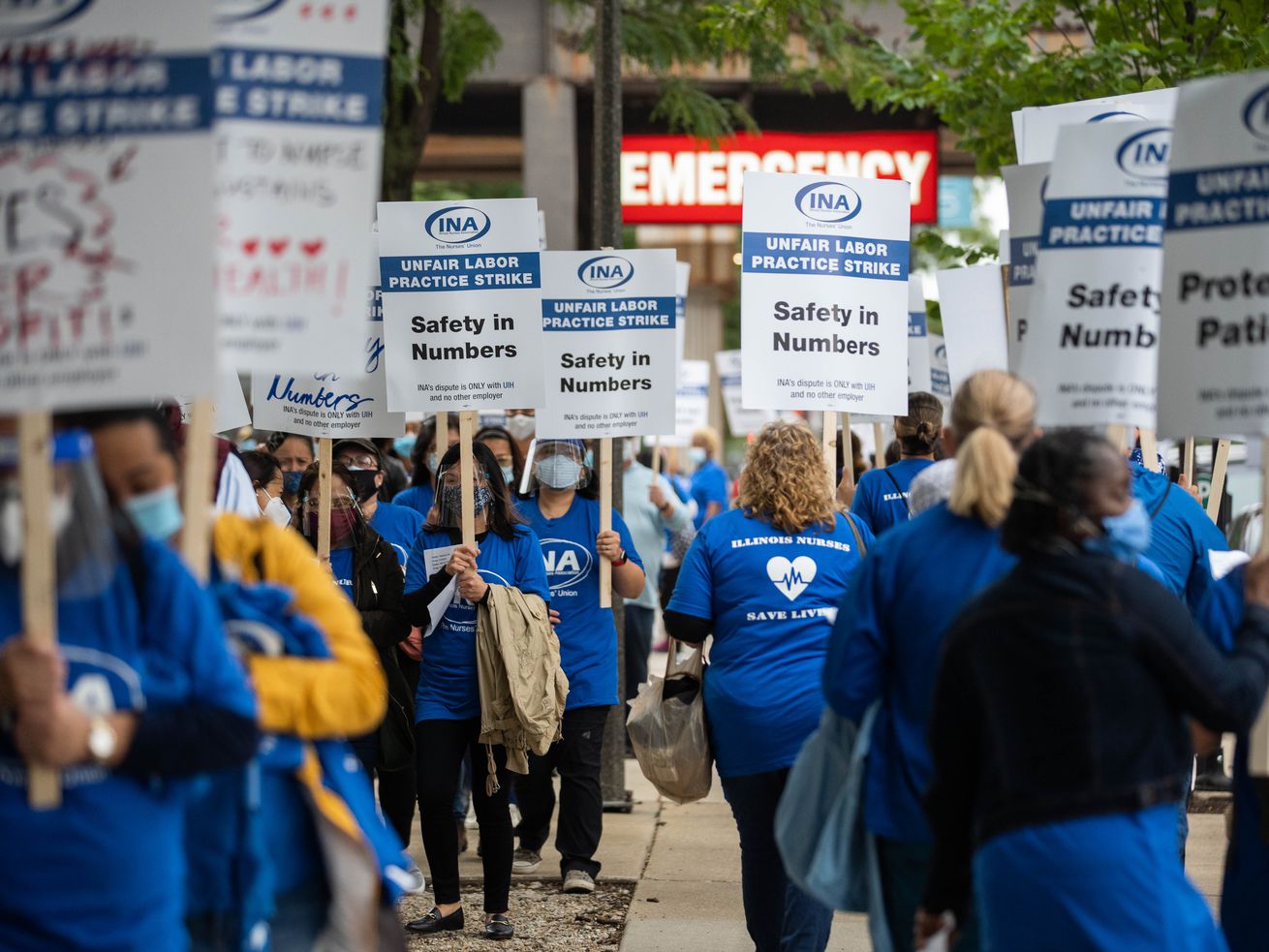 The four-year contract covers about 1,400 members and follows a weeklong strike by 800 nurses who returned to work Sept. 19 without a deal. | Pat Nabong/Sun-Times file

The Illinois Nurses Association voted to approve a contract with University of Illinois Hospital that guarantees additional hiring and more protections to safeguard against COVID-19, the union announced.

The four-year contract covers about 1,400 members and follows a weeklong strike by 800 nurses who returned to work Sept. 19 without a deal.

The agreement was approved by an overwhelming majority, 842-13, of those voting, the union said. Negotiators for the union and the hospital reached a tentative agreement last week.

The new contract includes wage increases starting at 1% that increase to 2% by the fourth year of the agreement.

The union said additional staffing and protective equipment were crucial to getting an agreement.

The contract includes a promise from the hospital to hire 160 more nurses to reduce the number of patients assigned to each nurse. The contract guarantees more personal protective equipment. It also includes a commitment to redesign the hospital’s airflow system and other structural improvements.

“This contract is dedicated to the 1,400 nurses who came to work every day while exposed to COVID-19 without proper protection,” Illinois Nurses Association President Doris Carroll said in a statement.

Providing protective gear, including N95 masks, has been a huge tension point among health care workers and their employers throughout the pandemic as the country is struggling with a supply shortage.

Hospital spokeswoman Jacqueline Carey said 130 nurses have been infected with COVID-19 and two died. One union nurse, speaking publicly at the beginning of the strike, said the number of infections among nurses was more than twice that number.

Separately, University of Illinois health workers represented by the Service Employees International Union Local 73 ended their strike last week after reaching tentative agreements on four contracts representing more than 4,000 members. SEIU members, who also made personal safety a key part of negotiations, will be voting through the end of this week, spokesman Adrian Rojas said.

Last week, hospital officials said they will release more details about the contracts once all the union votes are completed. Carey declined to comment Thursday on the nurses’ contract.

Brett Chase’s reporting on the environment and public health is made possible by a grant from The Chicago Community Trust.

How social unrest impacted investors’ perception in the equities market