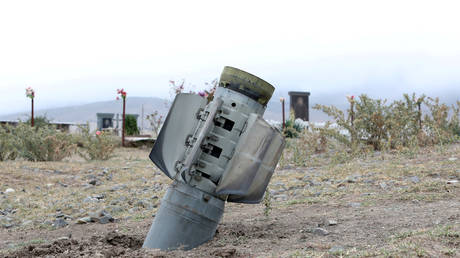 Two Le Monde journalists have suffered serious injuries after shelling by Azerbaijani forces hit a group of reporters who were covering the conflict between Yerevan and Baku over the disputed Nagorno-Karabakh region.

The journalists were working in Martuni, in the eastern part of the disputed territory, when the Azerbaijani military hit the city with an airstrike, the French daily said on Thursday. Two Armenian reporters also suffered injuries in the incident, and one local law enforcement officer died, according to Yerevan.

Both of the journalists were rushed to a hospital in Stepanakert – the largest city and the de facto capital of Nagorno-Karabakh. Citing an Armenian official, Reuters reported that one of the reporters was in a “grave” condition.

The reporters were said to be filming civilians in Martuni when they were hit. French President Emmanuel Macron said the foreign ministry’s “crisis center” had been mobilized and a medical plane had been prepared to take both injured journalists home “as soon as possible.”

“We are doing everything to stabilize the wounded on the spot before allowing their evacuation,” the French leader said ahead of an EU summit in Brussels.

Urgent❗️: 2 reporters (citizens of #France) from @lemondefr got injured in #Martuni region of #Artsakh from #Azerbaijani bombardment. They are being transported to the hospital.

In a separate incident, a car carrying a group of Agence France Presse journalists was also hit by Azerbaijani forces, according to Armenian media. The journalists managed to exit the vehicle unharmed, however.

Dozens of military and civilian casualties have been reported by both sides during the five days of intense fighting between the two South Caucasus nations, which have accused each other of targeting non-combatants.

The escalation of violence is the latest flare-up in a decades-old conflict between Yerevan and Baku over Nagorno-Karabakh, an internationally recognized part of Azerbaijan that is populated by ethnic Armenians seeking independence from Baku.

The recent developments have sparked concerns among world leaders, with Moscow, Paris, and Washington calling on both sides to immediately cease violence and return to diplomacy. Ankara, meanwhile, has pledged its full support for its long-time ally Azerbaijan.