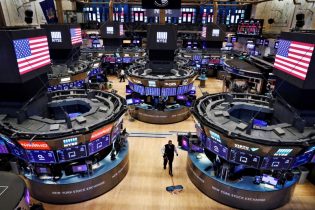 NEW YORK (Reuters) – The top-performing U.S. stockpickers of the third quarter made bets on companies ranging from healthcare technology to wind power, helping some funds post gains of 40% or more during a three-month stretch that ended with the S&P 500 suffering its first monthly decline since March.

The $7.4 million WP Small Companies fund posted the best overall performance among actively managed U.S. equity funds with a 45.9% gain through Sept. 29, according to Morningstar Direct data released on Wednesday. Its largest position by far was in healthcare technology company Ontrak Inc, which made up nearly 34% of its portfolio. Shares of the company are up nearly 268% for the year to date.

The $5.2 billion Baron Partners Retail fund followed with a gain of 45.4% for the quarter, slightly ahead of the $480 million Baron Focused Growth Retail fund.

The $95 million Shelton Green Alpha fund posted a 29.7% gain for the quarter, making it the 7th-best fund overall and the best performer among funds that invest based on environmental, social and governance factors. Its largest position was in Vestas Wind Systems A/S, which is up 55% for the year to date.

The outsized gains came in a quarter in which the benchmark S&P 500 rose 8.5% overall. The index dropped 3.9% in September, its first monthly decline since the Federal Reserve launched unprecedented stimulus measures in response to the coronavirus pandemic.

Among fixed income managers, the $3.3 billion AlphaCentric Income Opportunities fund posted the best return among active funds with a 10.4% gain for the quarter. The fund had its largest positions in mortgage-backed securities, including Option One Mortgage Loan Trust and Soundview Home Loan Trust, according to Morningstar data.

The $862 million MicroSector FANG+ 3x Leveraged fund posted the best return among all funds. The fund, which uses options to triple the daily gain or loss of technology giants such as Facebook Inc and Apple Inc, gained 94.5% over the quarter, pushing its year-to-date return to 205.5%.