Manchester United captain Harry Maguire has been named in England’s 30-man squad for the upcoming games against Wales, Belgium and Denmark.

The 27-year-old was initially called up for the Nations League games last month, despite an ongoing court hearing on the Greek island of Syros.

Southgate backed Maguire when announcing his squad in August but was forced to drop the 27-year-old later the same day after he was found guilty of assaulting a police officer, swearing, resisting arrest and bribery following an alleged incident in Mykonos.

Maguire, who strenuously denies the offences, has appealed against the verdict and subsequent 21-month suspended prison sentence and has since played in United’s two opening Premier League games, as well as the Carabao Cup win at Luton.

Here is your #ThreeLions squad for this month’s triple-header!

While Maguire was included, his Manchester United team-mate Mason Greenwood and Phil Foden were both missing.

The pair made their senior England debuts last month in Iceland before being fined by local police and sent home for breaching Covid-19 regulations.

Southgate said at the time that “trust needs to be rebuilt” with Greenwood and Foden, who are absent from the squad announced on Thursday.

There were first call-ups for Everton striker Dominic Calvert-Lewin, who has scored eight goals in the opening five games of the season, as well as Leicester’s Harvey Barnes and Bukayo Saka of Arsenal.

Southgate said Calvert-Lewin had really caught the eye in the opening weeks of the season.

Southgate said at a press conference: “I think with pretty much all of the squad we have not just looked at what they did last season but an emphasis on the beginning of this season as well.

“Dominic is a player we’ve liked for a long time. What he has added over the last 18 months are goals. Of course for a striker they are critical. He is in a really rich vein of form.”

No promises from Southgate 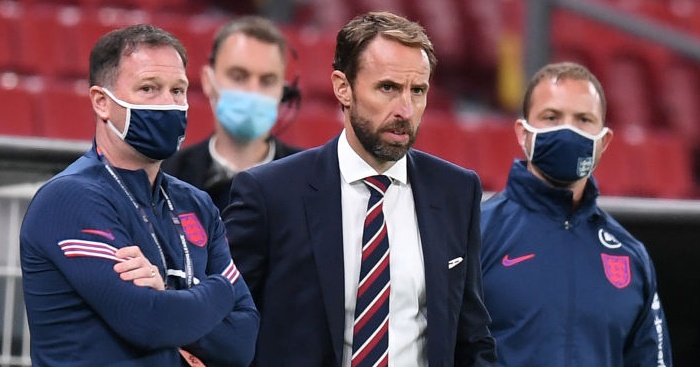 Southgate said he could not promise club managers all players would sit out all three games, but stressed their workload would be managed.

He said: “We are certainly not looking to start players in three games.

“I can’t guarantee no player will play no minute of all three games. You might end up having to put someone on for five minutes and people will say you didn’t do what you said.

“Our aim is to manage the squad. We have got to be responsible. We are conscious of the welfare of the players.”

Southgate added that Foden and Greenwood would be back in contention come his next squad.

He said: “We have to send a message to all our players in our teams at every age level that that sort of thing isn’t how we do things with England.

“Then we’ve got to rehabilitate these two boys. Young people will make mistakes. These lads have suffered enough now.

“I think they need this period of reflection but that gives them the opportunity to get back on their feet with their clubs, enjoy their football again.

“I can speak to them after this camp and it will be just be about their form then.”

The post Maguire returns as Southgate calls up trio to England squad for first time appeared first on teamtalk.com.

10 things you need to know before the opening bell