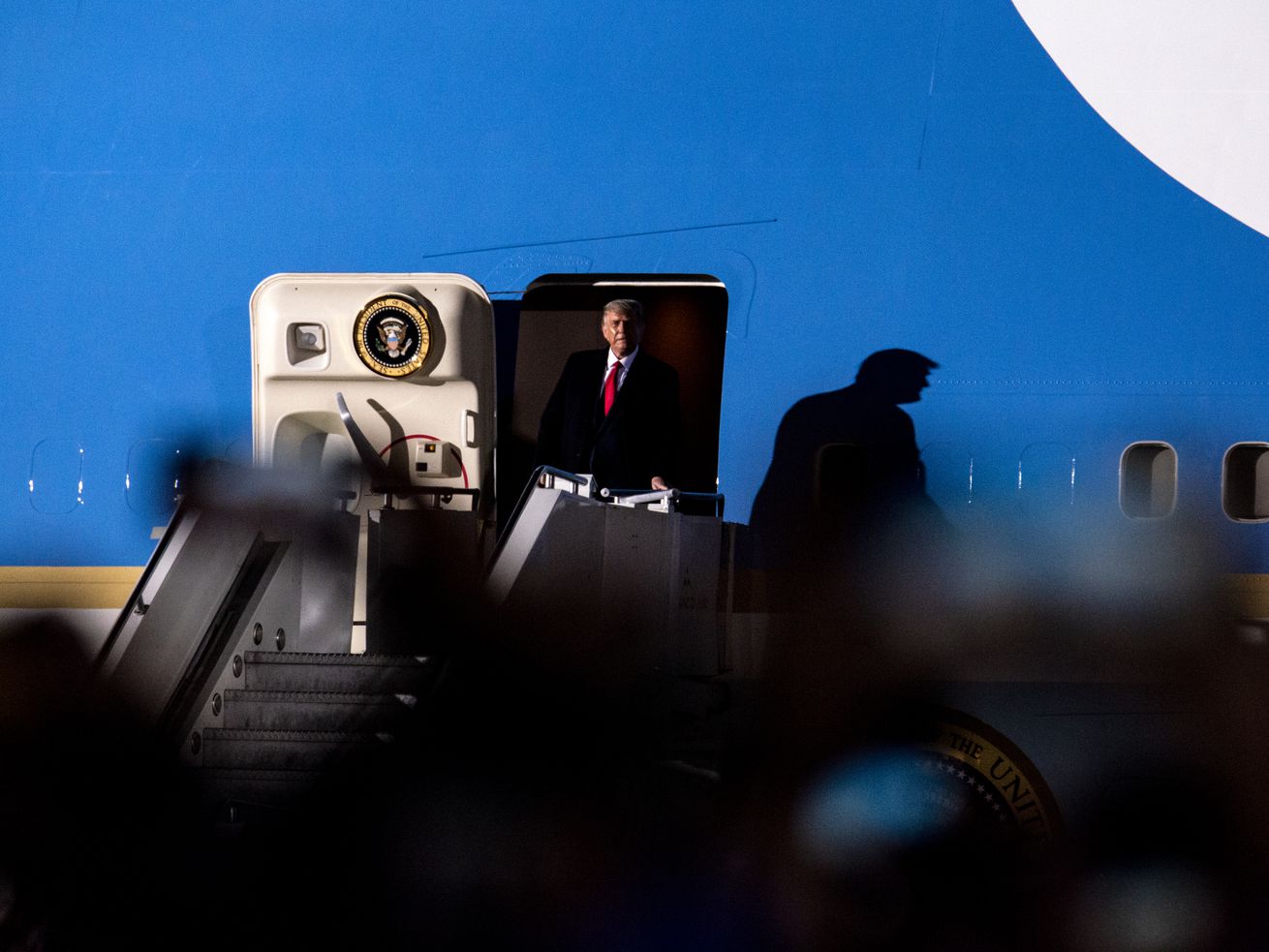 “She tells us how to run our country,” Trump said of Ilhan Omar.

Speaking Wednesday evening in Minnesota, a state with the largest Somali population in the country, President Donald Trump goaded his fans into, in effect, jeering their neighbors.

During a rally in Duluth, Trump accused Democratic nominee Joe Biden of having a plan “to inundate your state with a historic flood of refugees,” prompting his fans to boo. He then turned his ire on one of his frequent targets of abuse: Rep. Ilhan Omar, a Somali refugee who now represents Minneapolis in Congress.

“And what about Omar? Where she gets caught [ballot] harvesting. What the hell is going on? I hope your US attorney is involved,” Trump continued, referring to a newly released Project Veritas video that alleges (without any evidence) that Omar is involved in election fraud; the video has been dismissed as a “coordinated disinformation campaign” by researchers.

As “lock her up!” chants rang out, Trump added, “I mean, frankly, harvesting’s terrible, but it’s the least of the things that she has done. How the hell — then she tells us how to run our country. Can you believe it? What the hell is wrong with you people? What the hell happened?”

Before his rant was through, Trump suggested that another Congress member of color — Rep. Alexandria Ocasio-Cortez (D-NY) — should also be imprisoned for no reason in particular.

“[Omar’s] been crooked for a long time. This is the least of it. It’s time, and you know what, AOC also. It’s time. It’s time. If you take a look at what they — the corruption. The disgusting corruption,” he said. “Biden will turn Minnesota into a refugee camp.”

"Biden will turn Minnesota into a refugee camp" -- Speaking in a state with one of the largest Somali populations in the country, Trump goads his fans into booing refugees, prompting "lock her up!" chants directed at Ilhan Omar pic.twitter.com/dT2yuHxFDZ

Wednesday’s rally marked the second time in less than a month that Trump viciously attacked Omar in particular and the Somali community in general during a speech in Minnesota. On September 26 in Bemidji, Trump alluded to Somalis and asked his fans, sarcastically, “Are you having a good time with your refugees?”

Over a 24-hour period before Trump’s speech in Duluth, his campaign spent more than $10,000 on Facebook ads demonizing refugees. Those ads were ultimately taken down by Facebook for violating the company’s advertising policies.

Trump’s speech in Duluth came one night after a debate that will perhaps be best remembered for Trump’s refusal to denounce white supremacist groups.

Pressed to “condemn white supremacists and militia groups and say they need to stand down” by moderator Chris Wallace, Trump instead mentioned the neo-fascist Proud Boys group and said, “Proud Boys, stand back and stand by. But I’ll tell you what, somebody has to do something about antifa and the Left.”

Instead of condemning white supremacist groups, Trump’s comment was widely interrupted as encouraging them — including by a leader of the Proud Boys.

At this point, it’s not a surprise that Trump is unwilling to denounce racists who make up a substantial part of his base. But his trips to Minnesota — where he regularly uses Omar to demonize Somalis — have always illustrated how turning whites against minority groups is a key part of his divide-and-conquer strategy.

Speaking in Minneapolis almost exactly a year ago, for instance, Trump attacked Omar as “a disgrace to our country” and goaded the crowd into booing the city’s large Somali community. And during an interview with a Minneapolis TV station in April 2019, Trump said he had no regrets about the fact that his attacks on Omar led to threats on her life, saying, “She’s got a way about her that’s very, very bad, I think, for our country. I think she’s extremely unpatriotic and extremely disrespectful to our country.”

REPORTER: Congresswoman Omar says your video led to direct threats on her life. Any second thoughts?

TRUMP: "No, not at all." pic.twitter.com/wiSNptg0F3

Beyond racism, Trump’s sales pitch to Minnesota consists of lies about how much he’s done for the economy there — the state’s unemployment rate has in fact increased by about 50 percent since Trump took office — and lies about how his decision to deploy the National Guard to Minneapolis during George Floyd protests in May “saved” the city (in fact, the National Guard was deployed by the state’s Democratic governor, Tim Walz).

As condemnable as this pitch might be, it has had some resonance in Minnesota, where Trump came within 1.5 percentage points of becoming the first Republican presidential candidate to carry the state since Richard Nixon. But while Trump’s repeated trips to Minnesota indicate that he thinks he can actually win the state this time around, a new MPR News/Star Tribune/KARE-11 Minnesota Poll released last week showed Biden leading the president by six points. (FiveThirtyEight’s polling average has Biden leading Trump in the state by nine points.)

“If I lose Minnesota, I’m never coming back,” Trump told his fans in Duluth on Wednesday. Sen. Amy Klobuchar (D-MN) responded on Twitter by saying, “Goodbye.”

Will you help keep Vox free for all?

The United States is in the middle of one of the most consequential presidential elections of our lifetimes. It’s essential that all Americans are able to access clear, concise information on what the outcome of the election could mean for their lives, and the lives of their families and communities. That is our mission at Vox. But our distinctive brand of explanatory journalism takes resources. Even when the economy and the news advertising market recovers, your support will be a critical part of sustaining our resource-intensive work. If you have already contributed, thank you. If you haven’t, please consider helping everyone understand this presidential election: Contribute today from as little as $3.

Rain in the forecast before Halloween, find out when