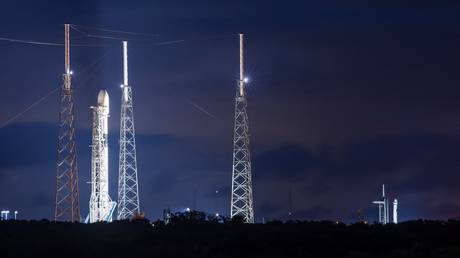 A launch of SpaceX’s Falcon 9 rocket was abruptly aborted just moments before lift-off, after registering abnormal readings on its ground sensors. The mission was set to deliver a new batch of Starlink satellites into orbit.

Launch time was set for Thursday morning local time at Kennedy Space Center in Florida. The Falcon 9 was loaded with the 13th batch of Starlink satellites.

The launch, however, was pulled just 18 seconds before lift-off, when the space company registered what is known as “an out of family ground system sensor reading.”

Standing down from today's Starlink mission due to an out of family ground system sensor reading; will announce a new target launch date once confirmed on the Range

The seemingly jinxed 13th batch of Starlink satellites was originally set to be launched in mid-September but was delayed over bad weather conditions, ones likely to disrupt the recovery of the Falcon 9’s reusable booster. The rocket has previously been launched twice by the company while loaded with satellites.

The 60 new satellites are set to join the Starlink constellation, which currently comprises more than 700 devices. SpaceX plans to launch a total of 40,000, which the company says are needed for the provision of global high-speed internet coverage. The cost of the ambitious project is estimated to be around $10 billion.

Victim's family speaks out after weekend shooting in St. Martinville: "He was a father, a brother, a son"