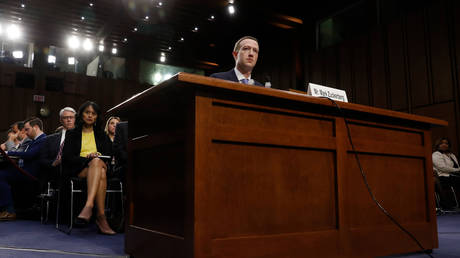 The US Senate Commerce Committee has unanimously agreed to subpoena the CEOs of Twitter, Google and Facebook to attend a hearing on the legal immunity enjoyed by internet companies over user content.

The committee’s decision on Thursday comes after it failed to reach agreement with the companies to send their respective chief execs Jack Dorsey, Sundar Pichai and Mark Zuckerberg voluntarily.

The hearing centers around potential reforms to Section 230 of the Communications Decency Act, which offers tech companies protection from liability over content posted online by their users.

"No provider or user of an interactive computer service shall be treated as the publisher or speaker of any information provided by another information content provider," the section reads.

The committee’s chairman, Republican Senator Roger Wicker from Mississippi, said on Thursday that "after extending an invite to these executives, I regret that they have again declined to participate and answer questions about issues that are so visible and urgent to the American people."

The hearing, which is likely to be held before the presidential election in November, comes amid growing bipartisan concern about the power of the technology giants – and their lack of liability over third-party content posted to their platforms and apps.

“On the eve of a momentous and highly charged election it is imperative that this committee of jurisdiction and the American people receive a full accounting from the heads of these companies on their content moderation practices,” Wicker said ahead of the committee’s vote.

The committee is considering a new bill from South Carolina’s Senator Lindsey Graham, to amend the Communications Act of 1934 so as to limit protection from civil liability for certain kinds of moderation, such as the blocking and screening of offensive material.

Senator Roger Wicker said back in early August that tech companies have made use of the Communications Decency Act, passed in 1996, to censor certain material and to “suppress content that they simply disagree with or find distasteful.” Congress should “make it clear that companies cannot enjoy special immunity from lawsuits if they censor political speech,” he added.